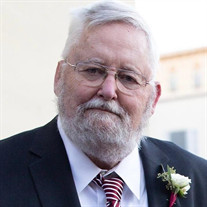 Dr. Arthur Linton “A.L.” Freeland, 74 of Sylvania, passed Saturday morning, January 8, 2022 at his residence. A.L. was born in Dublin, Georgia to the late Raymond Mancer and Mary Lane Harville Freeland and graduated class of 1965 from Dublin High School. While pursuing his A.A. degree at Middle Georgia College, he met love of his life, Jewelle, in his second quarter on campus. He would go on to receive his Bachelor’s and Master’s degrees from Georgia Southern College, and then his doctorate from the University of Georgia. He began his career as a history teacher at Claxton High School, where he was chosen STAR Teacher twice. His first administrative position was as principal of Annie Daniels Elementary School on Millhaven Plantation. That was followed by principalships at Effingham County High School and Jasper County High School, then teaching positions with both South Georgia College and Saint Leo University while living in McIntosh County, GA. The family returned to Screven County in 1985, where he accepted a position as principal of Central Middle School. He would oversee the transition from CMS to Screven County Middle School and its new campus on Friendship Road. He was a tireless champion for teachers at SCMS, particularly in the creation of the “A Walk Through Time” living history project which garnered accolades from the National Middle School Association and would go on to serve as a model for other schools. After his retirement in 2003, he became a member of the Screven County Retired Educators, Georgia Retired Educators and remained a lifetime member of the Professional Association of Georgia Educators. He was later honored with the establishment of the A.L. Freeland Chapter of the National Junior Honor Society at SCMS. During his long career he mentored countless educators, many of whom became dear and lifelong friends. He was a long term board member and Paul Harris Fellow of the Sylvania Rotary Club and a member and deacon of the Little Horse Creek Baptist Church. His love for woodworking led him into furniture making, boat building, and many hours building muzzle-loading rifles with other enthusiasts. He shot competitively for many years and was a longtime member of the Carolina Po Boys Muzzleloaders. He was also a lifetime member of the National Rifle Association as well as the National Muzzle Loading Rifle association, were he served as Territorial Representative and won three national championships in the off-hand flintlock pistol competition. He enjoyed hunting and fishing, gardening, restoring Ford and Farmall antique tractors, and spending time with friends and family in his workshop, where a project was always underway. He will be remembered for his sense of humor, dry and insightful wit, and self-effacing manner. He was a voracious reader, a history scholar and a masterful storyteller. Survivors include his beloved wife of 54 years, Jewelle M. Freeland; a son and daughter-in-law, John C. and Kelly S. Freeland of Hague, FL; a daughter and son-in-law, Ann F. and John P. Trapp of Evans, GA; grandchildren, Katherine F. and Bryce Youmans of Clarkesville, TN, Alex Freeland of Hague, FL, and Clayton Tanner of Sylvania, GA. Graveside services will be held on Thursday morning, January 13, 2022 at 11:00am in the Screven Memorial Cemetery with Pastor Jim Cheyne officiating. The family will receive friends two hours prior at the gravesite. Honorary pallbearers will be the Briar Creek Boatworks crew, the Friday Lunch Club, Carolina Po Boys Gun Club, The Sylvania Rotary Club, and Screven County Retired Educators. Friends may sign the online register book at www.joineranderson.com Joiner Anderson Funeral Home Screven Chapel is in charge of all arrangements.

The family of Dr. A.L. Freeland created this Life Tributes page to make it easy to share your memories.

Send flowers to the Freeland family.