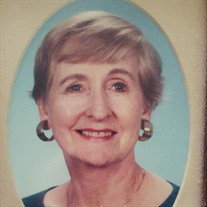 Adele Hooley Mrs. Adele Hooley, 94, departed this earthly life Friday, June 4, 2021, at Memorial Health University Medical Center in Savannah, GA. Born April 5, 1927, in Shirleysburg, R.D., Pennsylvania, the daughter of Harry and Olive Runk Scott, Adele graduated from Shippensburg University in 1950 with a degree in French and English, and began her English teaching career at nearby Mercersburg High School, where she met her future husband, Daniel Hooley, the music teacher. In 1953, she flew from California, while he flew from NY, NY, and they were married in Atlanta, GA by the Rev. Charles Allen, before continuing their journey to Statesboro, GA, where Dan would continue his career at what is now GSU. Three of their four children were born in Statesboro, the eldest, Steve, in NY when Dan was on leave to complete his doctoral dissertation at Columbia University. In 1961, the happy couple built and moved into a new home; shortly thereafter, Dan died in surgery a week prior to the birth of the fourth child, Laura. Adele soon returned to her former career, teaching French and English at the Marvin Pittman Laboratory School, and, after taking her Master’s degree in 1966, joining the English Department at the invitation of Dr. Fielding Russell, Head of Humanities at Georgia Southern. In those early years, she became a popular judge in the Foreign Language Department’s annual French Recitation Contest. In the 1970’s, Dean Jack N. Averitt chose her to teach for the initial and all six subsequent summers in his American-language Rotary Institute for Rotary’s International Scholars from all over the world, who would then in the fall go on to major universities all over America. Her experience led her to develop a specialty in ESL (English as a Second Language). In the English Department in the regular term, she spearheaded the development of an ESL program, in which she taught, in addition to her regular classes, until her retirement in 1992 as Assistant Professor Emerita of English. She also helped to develop and teach ESL classes for Continuing Education. Most importantly, she chaired the university-wide ESL Committee, working with Dean Jim Orr, who was director of all things regarding international students on the GSU campus. Along with her professional activities, Adele served her church on both the community and presbytery levels. A member of The First Presbyterian Church, she attended the Women’s Missionary Night Circle for many years, and also served on The Mission Committee, The Service Committee, and The DCE Committee. In 2003, she was recognized for her volunteer work with The Silver Lining Club at First Presbyterian Church. She was a member of The Shepherd’s Center organization, serving on the board in 2005. In 2012, she received a certificate of appreciation in recognition of “many years of guidance and teaching” The Fielding Russell Sunday School Class, an adult Bible study class, which she taught by the guided discussion method, of which she was a master. In civic engagement, Adele was politically active, serving on her party’s county executive committee many terms. In election years, she helped organize the headquarters, scheduled and staffed it, and was often the sole staff for long hours. She helped develop the first computerized call list for the organization, and she always voted. On New Year’s Day, 1962, Adele Hooley was a widow with four children, the eldest not yet eight, and the youngest not quite 2 weeks old. In addition to our accounts of her service to church, school, and community, we must add family. As her children grew, and especially in their adolescent years, her house—their house—became home to a multitude of her children’s friends, sometimes literally fostering informally or even formally. It was always a place of physical and spiritual educational and emotional nurturing. Along with former students, these young people, many now with children or even grandchildren of their own, rise up and call her blessed. Adele was preceded in death by her husband Dr. Daniel S. Hooley, her son Mark Hooley, her brother Horace Scott, and three sisters: Edith Roles, Erma Stevens, and Marie Smith; and dear friend Dot (Mrs. Winfield) Lee. She is survived by three children: Steve (Donna) Hooley of Hopulikit, GA, Ellen Hooley of Statesboro, GA, and Laura Anderson of Register, GA; three grandchildren: Daniel Stephen Hooley of Statesboro, GA, Matthew Lester of Atlanta, GA, and Joe I. Anderson, Jr.(Sarah Grace) of Statesboro, GA; one great-grandchild, Arlo Anderson of Statesboro, GA; one sister: Alice Shotick of Watkinsville, GA; and will be forever remembered by her numerous nieces, nephews and extended family, and dear friend Pat(Mrs. Wm.) Gillis. A graveside service will be held at 10 a.m. on Wednesday, June 09, 2021 at Eastside Cemetery. In lieu of flowers, donations may be made to the First Presbyterian Church, 1215 Fair Rd., Statesboro, GA, 30458. Friends may sign the online register book at www.joineranderson.com Joiner-Anderson Funeral Home & Crematory in Statesboro is in charge of arrangements.

The family of Mrs. Adele M. Hooley created this Life Tributes page to make it easy to share your memories.

Send flowers to the Hooley family.