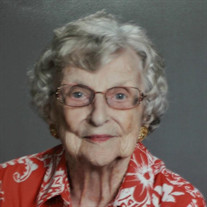 Agnes Grace Silva Tebeau died Wednesday night, September 22, 2021 at Syl-View Health Care Center. She was 101 years of age. Mrs. Tebeau was born August 9, 1920 in Somerville, Massachusetts and also lived in New Orleans, Louisiana and Avondale Estates, outside Atlanta. She attended the University of Georgia and following graduation in 1941, the Home Economics major took her first teaching job in Hiltonia, Georgia. There she met Dr. R.T. Tebeau, a local dentist, and the couple married September 1, 1943. They were married for over 50 years. A retired teacher and a homemaker, Mrs. Tebeau was a member of the First United Methodist Church of Sylvania, the Ellis Miller Sunday School Class, the Chance-Hill Circle of United Methodist Women, and was a member of the Chancel Choir for over 60 years. She was a volunteer at Screven County Hospital where she also served on the auxiliary board, served on the American Heart Association Board of Directors and was a member of the Screven County Retired Teachers Association. She was a lifetime member of the Screven County Chamber of Commerce where she was named Chamber Volunteer of the Year for 1999-2004. Known as the Goodwill Ambassador for the City of Sylvania, she delivered welcome bags to all new Screven County citizens as part of her work for the Chamber. The Agnes Tebeau Volunteer of the Year Award is still given each year at the Chamber’s annual banquet. She was the Brier Creek Chapter, Daughters of the American Revolution Outstanding Citizen of the Year in 2002, and the same the year she was chosen as the Sylvania Rotary Club Citizen of the Year. She was also the Ms. Syl-View 2018 Pageant winner. Graveside funeral services for Mrs. Tebeau will be Monday morning, September 27, at eleven o’clock at Screven County Memorial Park Cemetery. The Reverend Dorsia Atkinson, Jr., pastor of First United Methodist Church of Sylvania will officiate. The family will receive visitors from ten o’clock until the funeral hour at the gravesite. Pallbearers will be Sol Bragg, Jr., Harold Moats, Jimmy High, Bill Robinson, Davy Wells, Ray Reynolds and Ed Thompson. Honorary pallbearers, with heartfelt thanks from the family, will be those close friends who visited her regularly on Thursday mornings at Syl-View Health Care Center: Ainsworth Zeagler, James Thompson, Lee Thompson, Harriet Hagan Yancey, Sara Greene, Kathy Overstreet, Wanda Simon, Rhonda Cook, and Charlotte Robinson Hill. Mrs. Tebeau is predeceased by her husband, Dr. R. T. “Tom” Tebeau and a grandson, John Robert “Rob” Tebeau, Jr. Surviving are one daughter, Susan T. and Alex Thompson of Saint Simons Island; two sons and daughters-in-law, R. Thomas “Tommy”, Jr. and Sally Robinson Tebeau, of Columbus and John R. (Sue Ash) Tebeau, of Lincolnton; five grandchildren, Tom III and Deedee Tebeau, of Columbus, John R. and Mary Elizabeth Tebeau, of Athens, Meg McKinney and Josh Harrison, of Roswell, James Emory “Jay”, Jr. and Sally Page McKinney, of Los Angeles, California and Charlie Tebeau of Chattanooga, Tennessee; six great-grandchildren and several nieces and nephews. The Tebeau family wishes to express special thanks to all those who cared for Mrs. Tebeau at Syl-View Health Care Center. You couldn’t have been better. Remembrances may be made to the Choir Fund at First United Methodist Church of Sylvania, P.O. Box 258, Sylvania, GA 30467 Joiner-Anderson Funeral Home, Screven Chapel, is in charge of all arrangements.

The family of Mrs. Agnes Grace Silva Tebeau created this Life Tributes page to make it easy to share your memories.

Send flowers to the Tebeau family.