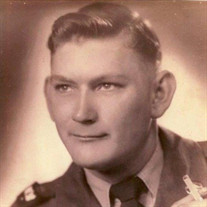 Albert Thomas Parker, age 90, of Eden, GA entered eternal rest on Saturday, January 15th 2022. He was born May 6th 1931 in Bulloch County to the late Eulie Wade Parker and Kitty Beasley Parker. Mr. Parker served in the United States Army during the Korean War and was honorably discharged in 1953. He earned his high school diploma via the GI bill following his service. He was employed at Union Camp in the box plant for 37 years and ended his career as a corrugating machine operator, retiring in 1991. Mr. Parker spent over 60 years of his adult life as a resident of Eden, GA in Effingham County. He was a gentleman farmer who raised livestock and grew crops in support of his family and community. Mr. Parker was a Freemason and Alee Shriner in the Hillbilly Unit. He participated in numerous parades and worked quietly behind the scenes to help others receive services from these charitable organizations. In retirement, he enjoyed consulting his two sons, Gary & Bruce, in their agricultural pursuits, fishing, and spending time with his family. In addition to his parents, he was preceded in death by his son, Wayne Keith Parker (Terry), his daughter, Linda Fennell Beck (Rommel), his daughter-in-law, Susan Fitzgerald Parker (Gary), and granddaughter, Jennifer Klein Little. He is survived by his ex-wife, Maurice Elizabeth Dunaway, his children, Gary Thomas Parker, Constance Klein Ball (Danny), Donna Parker Haupt (Gary), Sandra Kaye Smith, and Bruce Wade Parker (Angie), his 18 grandchildren, 25 great-grandchildren, and four more great grandchildren to arrive before the end of the year. The family will receive visitors on Thursday from 10:00am until 11:00am at Joiner-Anderson Funeral Home in Statesboro. The funeral will follow at 11:00am in the chapel with Mr. Richard Gay officiating. Interment will be at Bulloch Memorial Gardens. In lieu of flowers, the family requests that any memorial contributions be made to the Shriners Hospital for Children, Attn: Office of Development, 2900 Rocky Point Dr., Tampa, FL 33607. Friends may sign the online register book at www.joineranderson.com Joiner-Anderson Funeral Home & Crematory of Statesboro is in charge of arrangements.

The family of Mr. Albert Thomas Parker created this Life Tributes page to make it easy to share your memories.

Send flowers to the Parker family.