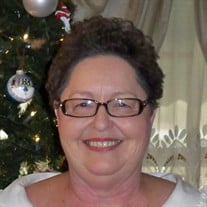 Mrs. Alecia Ann Waters Evans, 72 of Sylvania, passed Late Tuesday evening, February 9, 2021 at Memorial Health University Medical Center. The Screven County native was born to the late Tom and Betty Bazemore Waters. She graduated from Screven County High School, Class of 1966 and attended Abraham Baldwin Agricultural College afterwards. She was employed for 21 years as a deputy with the Screven County Sheriff's Department and retired from the State of Georgia, she served DFACS locations in Statesboro and Sylvania. She enjoyed her involvement with her children's sports as they were youths, often serving as team mom, chaperon, transporter, and many other capacities. her hobbies included playing canasta, sewing, knitting, cooking, and time spent with her sisters, children, and grandchildren. She also had a great love of history and was a dedicated genealogist, and was proud to call herself a ninth generation Screven Countian. She was a faithful and active member of the North Newington Baptist Church, a member of the Brier Creek Chapter of the Daughters of the American Revolution, United Daughters of the Confederacy, Colonial Dames of the 17th Century, Georgia Descendants of the Mayflower, Daughters of the American Colonists, and in her younger days, the Junior Woman's Club. She was preceded in death by her parents, sister, Fonda Elaine Waters, husband, John Flannery Evans, stepson, Russell Evans, and two brothers-in-law, Frank Rutherford and Randall Bashlor. She is survived by her children, Lori Cook of Hixson, TN, and Carrie and Cam Cannon of Los Angeles, CA, sisters, Vonnie Rutherford of Statesboro and Maria Bashlor of Sylvania, GA; nieces and nephew, Michelle Rahn White, Kenneth Rutherford, and Ginger Rahn; and several great- nieces and nephews, and her step-children; Chuck and Kay Evans of Guyton, Mickey and Debbie Evans and Ted and Lynn Evans, all of Sylvania; grandchildren, Ashleigh Cook, Allison Cook, Patrick Cannon, and Alecia Cannon. Graveside services will be held on Saturday, February 13, 2021 at 2:00pm in the Screven County Memorial Cemetery with Rev. Slade Speir officiating. The family will receive friends after the service. Honorary pallbearers will be members of the Brier Creek Chapter of the Daughters of the American Revolution. In lieu of flowers the family asks that memorial contributions be made to the North Newington Baptist Church, P.O. Box 236, Newington, GA 30446. Friends may sign the online register book at www.joineranderson.com Joiner Anderson Funeral Home Screven Chapel is in charge of all arrangements.

The family of Mrs. Alecia Ann Waters Evans created this Life Tributes page to make it easy to share your memories.

Send flowers to the Evans family.