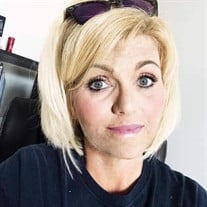 Statesboro, Georgia Our beautiful mom, Alicia (Lisa) Jean Braswell, age 50, died peacefully surrounded by loved ones on October 28th, at East Georgia Regional Medical Center after an extended illness. She was preceded in death by her father, Danny Hyland Braswell; her grandparents, Mr. and Mrs. Eugene Braswell and Mr. and Mrs. Elton Rowe. Our mom was a 1989 graduate of Southeast Bulloch High School. She was a member of The Bridge Church in Pembroke and served as the Director of Operations at Open Hearts Community Mission. Dearly loved by residents and volunteers, Lisa was a unique combination of a den mother, role model, parent, and confidant to the residents. She was devoted to her work and her legacy will live on in the many lives she touched. A lover of the outdoors, gardening and plants, she also enjoyed working on Saturdays alongside her dear friend, Becky Polk, at Polk's Plus in Pooler. Her greatest work on earth were her two sons for whom she had an unwavering love. She is survived by us, her two sons, Danny James Bohannon, (his fiancé Brooke Michelle Hendrix) and Wesley Hyland Bohannon both of Stilson. Her mother, Ophelia Rowe Braswell and her sister and brother in law, Delia and Chip Mobley of Statesboro. Five aunts, Dianne Braswell Lamb (James) of Brunswick, Dale Braswell Holcombe (Kenny), Richmond Hill, Darlene Braswell Conley (David), Debbie Braswell Holcombe and Janice Rowe Holcombe (Mark) of Rincon. Several cousins and many special friends. Visitation will be Sunday from 2:00pm until 4:00pm at The Bridge Church, 745 Mason Road, Pembroke, Ga. 31321 Funeral service will be at 4:00 PM Sunday following the visitation, with Rev. Lawrence Butler officiating. Pallbearers will be: Lynn Parker, Teddy Parker, Brendan Padgett, Brent Conley, B.J. Parker and Ken Holcombe. Honorary Pallbearers will be volunteers, board members and residents of Open Hearts Community Mission. Burial will be in Eldora Cemetery. In lieu of flowers, memorial contributions may be made to her son's college fund. Checks may be made payable to Wesley Bohannon College Fund and mailed to Edward Jones Investments at 43 Courtland Street, Statesboro, GA 30458. (912-489-8636) We will miss our mom's laughter, her jokes and pranks. She was our world and we were hers. Our sadness is great, but as Christians, we are left with a most precious assurance, the joy of knowing she is whole and well in heaven and that we will see her again one day. Friends may sign the online register book at www.joineranderson.com. Joiner-Anderson Funeral Home & Crematory of Statesboro is in charge of the arrangements.

The family of Alicia (Lisa) Jean Braswell created this Life Tributes page to make it easy to share your memories.

Send flowers to the Braswell family.