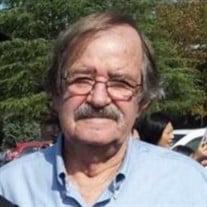 Statesboro, Georgia Mr. Allen D. Pilz, known by most as Dave, died Saturday, August 28, 2021 at the Georgia War Veterans Home in Milledgeville. Dave was the son of the late Robert and Esther Spangler Pilz. He was born in Tacoma, Washington on August 18, 1941 and remained there until he joined the Army. He was stationed in Fort Stewart, Georgia where he met and married Joyce L. Nesmith. After his discharge from the service, Dave was employed as a machinist at American Cyanamid until his retirement. In 1983 the family moved to Statesboro where Joy owned and operated Joy’s Preschool and Dave, when not helping at the preschool, operated their Antique business Ye Olde Shoppe. In 2003 they sold their home and businesses and moved to their weekend home in the Cypress Lake Community making this their permanent home. He loved spending time with his grandkids there fishing, watching westerns and enjoying the sunsets off the deck of the residence with his wife. He is preceded in death by his wife of 57 years, his parents, and two brothers. Dave is survived by two sons, Chris Pilz of Pooler, Ga. And Ryan Pilz of Statesboro, Ga.; three grandsons, Joseph Pilz of Savannah, Zachary Pilz (Mallory) of Akron, Ohio, and Jacob Pilz of Athens, Ga, and one granddaughter, Laura Beth Pilz of Winder, Ga; and a niece, Taryn Reardon of Marshfield, Wisconsin. Graveside services and burial with military honors will be held on Wednesday, September 1, 2021 at 12:00pm at Forest Lawn Memory Gardens in Savannah, Georgia with Pastor Tyler Woodson officiating. Pallbearers will be Joseph Pilz, Zachary Pilz, and Jacob Pilz. Memorial contributions may be made to the Georgia War Veterans Home, 2249 Vinson Highway, Milledgeville, GA 31061. Friends may sign the online register book at www.joineranderson.com. Joiner-Anderson Funeral Home & Crematory of Statesboro is in charge of the arrangements.

Statesboro, Georgia Mr. Allen D. Pilz, known by most as Dave, died Saturday, August 28, 2021 at the Georgia War Veterans Home in Milledgeville. Dave was the son of the late Robert and Esther Spangler Pilz. He was born in Tacoma, Washington on... View Obituary & Service Information

The family of Mr. Allen D. "Dave" Pilz created this Life Tributes page to make it easy to share your memories.

Send flowers to the Pilz family.