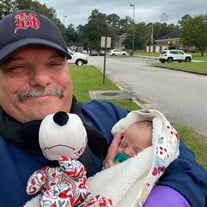 Lieutenant Andrew “Andy” David Orphanoudakis, 56, of Sylvania, GA passed on October 3, 2021 at the University Health Care System. Andy was born in Neptune NJ to Joyce Husted and the late George Andrew Orphanoudakis and was raised in the Greek Orthodox Church. He grew up in Freehold Township and graduated from high school 1983. After high school, he held many jobs at the same time which included; construction, serving in the US Army Reserve as a heavy equipment operator and then the National Guard as a combat medic, and also as a teamster for eight years. He was a firefighter for 38 years, working at firehouses in Salisbury, NC, Mooresville, NC, having served as fire instructor for eight years and HazMat Tech for eight years, 165th Airlift Wing of Garden City, GA, Hilton Head, SC, and lastly Hardeeville, SC, where he held the position of Lieutenant. He had also volunteered in Rincon and Screven County. During his off time he enjoyed cooking and grilling and ribs were always a staple, offroading and working on his and his wife's Jeeps, attending Low Country Mud Rats Jeep Club meets. He was an avid 2nd Amendment supporter, outdoorsman, and loved nothing more than the time spent with his grandson. He is survived by his wife and high school sweetheart of 40 years, Tracy Thomson Orphanoudakis; his daughters, Rachel (Jordan) Yarbrough and Georgia Orphanoudakis; grandson, Jett Yarbrough; brother, Alan (Catherine) Orphanoudakis and their children, Alexis and Catarina. Private funeral services will be held on Friday, October 8, 2021 at 11:00am at the St. Paul's Greek Orthodox Church in Savannah, GA with Father John Wallace officiating. Public funeral services will also be held on Friday at 2:00pm at the Hardeeville Recreation Complex, 285 John Smith Rd. Hardeeville, SC 29927. Burial will be at the family farm “Politically Incorrect Acres” 256 Bell Pond Rd., Sylvania, GA, in the Orphanoudakis Cemetery, on Saturday, October 9, 2021 at 10:00am. In lieu of flowers the family asks that memorial contributions be made to the Muscular Dystrophy Association at mda.org. Friends may sign the online register book at www.joineranderson.com Joiner Anderson Funeral Home Screven Chapel is in charge of all arrangements.

The family of Lieutenant Andrew "Andy" David Orphanoudakis created this Life Tributes page to make it easy to share your memories.

Send flowers to the Orphanoudakis family.