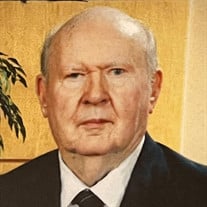 Arvard (Arv) O. Vogel USAF Veteran, retired GSU professor and CEO of Southern University Press Arv met “rails end” on 12/5/21. He was born 11/18/29 in Provo, Utah and was raised in Thistle, Utah (a small railroad junction town). He is proceeded in death by his parents, Oscar F. and Pearl Marie Vogel; his wife of 60 years, Judy Wilson Vogel; and his sister Roberta Jacobson of Provo, Utah. Survivors are his daughter Beverly (Tony Tsapralis) of Dahlonega, Ga; Son Bruce Vogel (Kim) of Chattanooga, Tn; Son David Vogel (Paige) of Alpharetta, Ga; and daughter Lorra Vogel of Irving, Tx. Also, two grandchildren, Evyn and Eric Vogel of Alpharetta, Ga; Brother Ron Vogel (Nancy) of Brooking, Oregon; and sister Arvilla Jueschke (Alex) of Salt Lake City, Ut; and several nieces, nephews, and cousins from out west. Arv started working part-time for railroad at age 13 until starting full time in 1948 on the track maintenance department. He worked various positions (machinist helper, fireman) at the railroad while completing two years of college prior to his military service in Korea. Arv enlisted in the Air Force as a pressman and started in Idaho printing propaganda and military warfare tactic manuals. He was responsible for printing the leaflets that were dropped by airplanes over areas of conflict. He was later given assignment in England, with responsibility of printing secretive information for military officials. Years later he discovered his group was printing items for the CIA. Once returning from the military he completed his bachelor’s degree at Colorado State. From 1958 to 1963, he taught, was department head, and director of vocational education at San Ramon Valley High School in Danville, Ca. From 1963 to 1967, he was head of the graphic arts department at state university of New York (Oswego). Arv moved to Georgia Southern in 1967 to teach graphic arts. He developed and organized the printing management program in 1969 which has turned out many outstanding graduates. Arv was a member of many professional organizations including; the Printing Association of Ga, International Graphic Arts Ed. Association (Pres, VP, Board of Directors), Georgia Association of Education— (President, VP), American Industrial Arts Association, and the American Vocational Association. Arv was the author of five books in the printing area and 143 articles for major publications, such as Eastman Kodak and American Industrial Arts Association. Under the Southern University Press, he laid out, designed and published over 500 college text, lab manuals and the like for many colleges in the southeast. He was a die-hard Ga Southern Eagle fan, watching baseball and Basketball in the ‘70s, but really loved the evolution of the football program in 1981. A Graveside service will be held at Bulloch Memorial Garden on December 9th at 2pm. In lieu of flowers, the family requests donations be made to Ogeechee Area Hospice, PO Box 531, Statesboro GA, 30459, an organization the Vogel family supports. Friends may sign the online register book at www.joineranderson.com Joiner-Anderson Funeral Home & Crematory of Statesboro is in charge of arrangements.

The family of Mr. Arvard O. Vogel created this Life Tributes page to make it easy to share your memories.

Send flowers to the Vogel family.