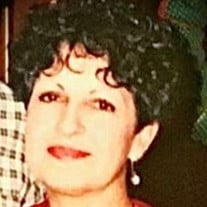 Statesboro, Georgia Mrs. Barbara M. Franco, 74, passed from this earth peacefully, Tuesday, April 20, 2021, under the excellent care of the staff at Ogeechee Area Hospice Inpatient Facility. Barbara was a lifelong resident of Statesboro, Georgia. She also lived in several other places in the United States including San Diego, California and Virginia Beach, Virginia, due to her father’s proud Naval career. Barbara was born to Robert Joseph McCool and Mary Eunice Clarke in Statesboro, Georgia on December 28, 1947. Barbara enjoyed many years of employment at Brooks Instruments in Statesboro where she made lifelong friendships. She then went on to finish her career with the State of Georgia at Vocational Rehabilitation, where she also formed several special friendships. Barbara enjoyed traveling both before retirement and after. She loved the mountains and would often plan last minute trips if there was even a slight chance of snow. She was an animal lover and always traveled with the poodles she had over the years. Most notably Barney, Charlie and now Ozzie. She also enjoyed the beach and made many early morning day trips with her best friend. Barbara had a long lasting love of Elvis Presley and you could be guaranteed to hear his music playing anytime you visited. Barbara enjoyed spoiling her only grandchild and they made many a large shopping trip which was also a favorite pastime for her. Barbara enjoyed 38 years of marriage to her loving husband Tony, who she met at the skating rink. They enjoyed many adventures over the course of their long marriage. They were perfect for each other and are two of the kindest people you could ever know. Survivors include Barbara’s husband, Tony Franco, her son and daughter-in-law, Chris and Jamie Thompson, and their daughter Bo Lee of Statesboro, Georgia, as well as several close friends who were like her family. Graveside memorial services will be held privately at the family cemetery. The family requests that memorial contributions be made to Ogeechee Area Hospice, P.O. Box 531, Statesboro, Georgia 30459. Friends may sign the online register book at www.joineranderson.com. Joiner-Anderson Funeral Home & Crematory in Statesboro is in charge of arrangemen

The family of Mrs. Barbara M. Franco created this Life Tributes page to make it easy to share your memories.

Send flowers to the Franco family.