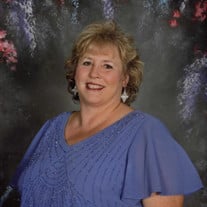 Portal, Georgia Ms. Barbara Oglesby Mills, age 58, died Saturday evening at the East Georgia Regional Medical Center in Statesboro following a brief illness. The native and lifelong resident of Bulloch County was a 1981 graduate of Portal High School. She worked with Cooper Wiss for several years and then began her career with the Bulloch County Board of education working as a paraprofessional at Portal Middle-High School for the past 27 years. Barbara graduated from Ogeechee Technical College in 2015. She was a member of the First Baptist Church of Portal. In addition to her joy of working with her students, Barbara’s other passion was working with beauty pageants, she was a Miss Georgia Pageantry Judge and spent many weekends working with multiple pageants. Barbara was preceded in death by her parents, Clinton and Myrle Jackson Oglesby; her husband, Robert Akin Mills, Jr; a son, Kelvin Mills and her step father, Dewey Bolton. Surviving are a daughter, Tiffany Mills of Portal; a son and daughter-in-law, Robert Mills, III and Lisa of Portal; her grandchildren, Addie and Alayna Smith and great granddaughter, Violet Helmly; one brother and sister-in-law, Clinton Keith and Barbara Oglesby of Rocky Ford. Several nieces, nephews, great nieces and nephews also survive. The family will receive visitors on Wednesday, December 2, 2020 from 5:00pm until 8:00pm at Joiner-Anderson Funeral Home in Statesboro. Funeral services will be Thursday at 1:00pm in the chapel of Joiner-Anderson Funeral Home with Pastor Thomas Hendrix officiating. Interment will be in the Finch Family Cemetery. Pallbearers will be Casey Autry, William Burke, Robert Miller, Chris Oglesby, Chris Bazemore and Termell “Juicy” Jackson. Honorary Pallbearers will be her former students and co-workers at Portal Middle- High School. Friends may sign the online register book at www.joineranderson.com. Joiner-Anderson Funeral Home & Crematory of Statesboro is in charge of the arrangements.

The family of Mrs. Barbara Oglesby Mills created this Life Tributes page to make it easy to share your memories.

Send flowers to the Mills family.