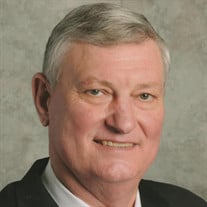 Bobby C. Smith, Jr. 67, of Rocky Ford, Georgia passed at his family farm on January 8, 2022. Bobby was born to Bobby C., Sr. and Cecelia H. Smith and was a third generation farmer who began farming in 1974. He was a native and lifelong resident of Screven County and was a graduate of Screven County High School and Abraham Baldwin Agricultural College. Along with his two sons, they owned and operated Smith Farms, where they grew cotton, corn, peanuts, and wheat. Bobby was a member of First United Methodist Church of Sylvania, the North Augusta Boating Club of Plum Branch, SC, and numerous supper clubs. In 2010, he was recognized as the Conservationist of the Year by the Ogeechee River Soil and Water Conservation District. He was an honorary member of the Screven County FFA, hosted the Screven County FFA Alumni Pheasant Shoot annually at the family farm, and in 2018, was a recipient of an Honorary State FFA Degree from the Georgia FFA Association. He also served on the Board of Directors for Planters Electric Membership Cooperative for 25 years in numerous capacities. He served on the Board of Directors for Oglethorpe Power Company for the past 13 years and served as Chairman since 2015. He served on the Georgia EMC Board and was selected as GEMC Director Volunteer of the year in 2014. Since 2010, he has served as chairman of the Screven County Industrial Development Authority. In 2013, Bobby was recognized as Volunteer of the Year by the Georgia Economic Development Association. He was chosen because of the vision and wisdom he brought to the organization, along with countless hours he spent meeting with business prospects and planning for future growth. He has also served on the Ogeechee Technical College Board and has been honored by his community as both “Lion of the Year” and Rotary’s “Citizen of the Year”… and he’s not even a member of the Rotary Club! He will be remembered for this unconditional love of his family, especially his grandchildren. He will be forever remembered for his love of grilling, community, and service to others across the state. He is preceded in death by his parents, a special aunt, Georgia Jordan, and a sister-in-law, Algina “Gina” Walker Smith. He is survived by his wife of 46 years, Kaye Smith; two sons and daughters-in-law, Jason and Cali Smith and Justin and Amber Smith; grandchildren, Calin Smith, Jay Conley Smith, Jacob Smith, Bradley Smith, and Jovey Smith; a brother and sister-in-law, Andy and Mary Ann Smith; three sisters and a brother-in-law, Miriam Thompson, Paula Raines, and Lydia and Mark Bragg; sisters-in-law and brothers-in-law, Joyce and Robert Singhal and Judy and Gus McEachern; aunt-in-law and uncle in law, Linda and Roger Blanchard and several nieces, nephews, and cousins. Visitation will be held on Tuesday evening from 5:00-7:00 PM at the First United Methodist Fellowship Hall. Funeral Services will be held Wednesday, January 12, 2022 at 2:00 PM in the First United Methodist Church with Rev. Dorsia Atkinson and Rev. Dr. Karen Zeigler officiating. Interment will follow in the Oak Grove United Methodist Church Cemetery. Pallbearers will be employees of Smith Farms; Bruce Rowell, L.B. Pinkney, Wesley Sirmons, Joe Jones, Jonathan Forehand, Jake Thompson, Tanner Forehand, and special friend, Wade Hodges. In lieu of flowers, memorial contributions may be made to the Screven County FFA Alumni, Attn: Jean Potter at 505 West Ogeechee St. Sylvania, GA 30467. Friends may sign the online register book at www.joineranderson.com.

Bobby C. Smith, Jr. 67, of Rocky Ford, Georgia passed at his family farm on January 8, 2022. Bobby was born to Bobby C., Sr. and Cecelia H. Smith and was a third generation farmer who began farming in 1974. He was a native and lifelong resident... View Obituary & Service Information

The family of Mr. Bobby C. Smith Jr. created this Life Tributes page to make it easy to share your memories.

Send flowers to the Smith family.