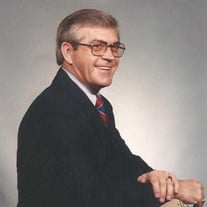 Mr. Bobby Charles Staggs, 84, passed away peacefully on May 27th, 2021 at East Georgia Regional Medical Center in Statesboro, Georgia. Bobby was born in Beech Creek, Ashley County, Arkansas on November 3rd, 1936 to John Brown Staggs and Vennie Elenore Jones Staggs. He attended public schools in Keiser and Osceola, Arkansas. After graduation, in 1954, his mother signed for him to enlist in the United States Navy at the age of 17. While he was stationed in Jacksonville, FL he met the love of his life, Janie Lue Crosby. They were married on December 10th, 1955 in Folkston, GA. They celebrated 65 loving years of marriage last year. Bobby retired a 20-year Naval Veteran and served in the Vietnam War conflict. He was an Aviation Structural Mechanic. He was blessed to have traveled the world both with and without his family. He was stationed aboard three Naval Aircraft Carriers: the USS Hancock, the USS Midway and the USS Saratoga. He retired in 1974 having reached the rank of Chief Petty Officer, AMC (Air Mobility Command). He was especially proud of his metal decorated Naval service and honored to be a retired Veteran. Upon his retirement from the military, he began a career in law enforcement. He, Janie and their four children first settled in Claxton, GA where he worked as both an EMT and a Deputy Sheriff with the Evans County Sheriff’s Department in Claxton, GA. In the 80’s they moved to Brunswick, GA where he employed with the Brunswick Police Department, their final move was to Statesboro, GA where he enjoyed a ten year career with the Statesboro Police Department, where he was named the” Police Officer of the Year” numerous times. His law enforcement career ended after suffering a massive heart attack in 1996 when he retired for a second time. Bobby, however, was a workaholic, enjoyed staying busy and re-entered the work force. Up until his final retirement, he worked as a service writer for a couple of local dealerships, provided security for the local movie theater, Managed the Western Auto up until it closed, his final job was managing the transportation drivers and providing security for Franklin Chevrolet from where he finally retired. Bobby joined the Shriners in May of 1974, where his membership was active for 47 years. He was also an active member of the American Legion, Dexter Allen Post #90 for 28 years. He served as the American Legion Post #90 in many positions of the years, Commander for 3yrs, Sargent at Arms, Comptroller and Adjunct, happily filling in where needed. He was also named “Legionnaire of the Year”. He was a welcomed face weekly as he worked Bingo for many of those years. He supported the law enforcement community as a member of the FOP (Fraternal Order of Police). He and Janie passionately supported several military, and law enforcement charities, as well as St. Jude’s Children’s Hospital. Bobby had a magnetic/contagious smile and personality, he loved to laugh. He was a man that loved to work, loved to be of service and loved people unconditionally, especially his family and community. He loved a good cup of black coffee, dessert and especially John Wombles glazed donuts. He was a dog person and loved each one that he and Janie raised over the years and treated them like one of their children. His taste in music was eclectic, from Country, Rock, to Reggae, there was always music in the car, over the years he and Janie regularly attended live music concerts. He and Janie also loved to travel with 1000’s of photographs journaling their many adventures. He loved his shop, could fix just about anything, loved fishing but rarely took the time off to enjoy. He was a kind and compassionate man who rarely if ever, spoke ill of others. He was generous to a fault, a quality his family, friends and strangers were blessed by. His grandchildren loved him and affectionally called him “Pops”. He was preceded in death by both his parents, John and Vennie Staggs, his wife, Janie, two sisters Judy Wallace and Betty Prance, four brothers, John Staggs, Don Staggs, Gerald Staggs and Gary Staggs, brothers-in-laws; Leon DeLoach, Bob Hemphill, and Ralph Prance, sisters-in-laws; Annie Bell Klein, Betty DeLoach and one nephew Jimmy DeLoach. His life will be missed and forever cherished by his survivors. He leaves behind four children: Donna McElveen, Delena Staggs, Stephen Staggs (Nancy Guarino), Stacey Staggs (Rowena). Grandsons, Marshal Jones (Corinna), Colt Staggs, Thomas Staggs, Robby Staggs, Gunner Staggs, Travis Givens, Ryan Hart and Johnathon Hart. Granddaughters, Jessica Burkett (Ben), Angie Hart and Ashlee Hart along with ten great grandchildren. In addition he leaves behind four sisters Glenda Womble (Billy), Patsy Fike (Allen), Susie Butterworth, Sherrie Kirkland (Scott), one brother in law Gary Wallace, three sisters in laws Shirley Staggs (Sonny), Sherry Staggs (Buddy) and Ester Hemphill (Bob) along many nieces and nephews, and lastly his dog “Taco”. Bobby will be cremated. Visitation for him will be held at Joiner Anderson Funeral Home in Statesboro onThursday, June 3rd, 2021 from 5:30 – 7:30. He will be interned with a service of military honors held for both he and his beloved wife Janie on June 4th, 2021 at 1:00pm at the Veterans Memorial Cemetery in Glennville, GA. Friends and family are welcome to attend. Memorial contributions may be made to St Jude’s Childrens Foundation at www.stjude.org, or the Wounded Warriors Project at www.woundedwarriorproject.org. Friends may sign the online register book at www.joineranderson.com. Joiner-Anderson Funeral Home & Crematory in Statesboro is in charge of arrangements.

The family of Mr. Bobby Charles Staggs created this Life Tributes page to make it easy to share your memories.

Send flowers to the Staggs family.