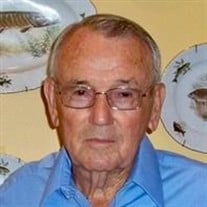 Mr. Bobby Mack Tootle December 16, 1933 - March 5, 2022 Mr. Bobby Mack Tootle, age 88, died peacefully on March 5th at his residence under the care of Southern Manor Companion Care and Regency SouthernCare Hospice. The native and lifelong resident of Bulloch County was the son of the late Ernest Cleo Tootle and Myrtle McCorkle Tootle of Nevils. Bobby was raised in the Nevils community and graduated from Nevils High School in 1953. He married Charlotte Hodges Tootle in 1953 and began work as a carpenter before pursuing his passion of farming full time. Over the years, Bobby developed a successful and diversified farming operation. In 1967, he received the Bulloch County Outstanding Young Farmer Award. Bobby also served in the Army National Guard for several years. Bobby was a faithful member and deacon of Ephesus Primitive Baptist Church. Bobby will be remembered for his generous heart and sense of humor, always enjoying a laugh with family, friends and loving caregivers. He was preceded in death by his wife of 67 years, Charlotte H. Tootle; a son, David W. Tootle; a sister, Martha Burnsed and a brother, Edwin Tootle. Bobby is survived by his son and daughter-in-law, Mike and Marsha Tootle of Kennesaw, GA; a daughter-in-law, Trish Tootle of Statesboro; four grandchildren - Matt Tootle (Talette), Clint Tootle (Catherine), Lindsey Tootle and Eric Tootle; two great-grandchildren - Athan Tootle and Marley Tootle; and several cousins, nieces and nephews. The family would like to express their gratitude to the staff and caregivers of Southern Manor Companion Care and Regency SouthernCare Hospice for their hard work and loving care of Bobby. A visitation will be held on Tuesday March 8th from 1:00 pm until 2:00 pm at Joiner-Anderson Funeral Home, followed by a funeral in the Chapel of Joiner-Anderson Funeral Home with Elder Will Martin and Elder Ric Stewart officiating. Interment will be in Bulloch Memorial Gardens. Pallbearers will be Matt Tootle, Clint Tootle, Eric Tootle, David Stewart, Ricky Nevil and Lehman Nevil. Memorial contributions can be made to Ephesus Primitive Baptist Church, c/o David Stewart, 1916 Chatsworth Court, Statesboro, Ga. 30461. Services are streamed using Facebook Live through a private group. Only members of the group will be able to view the service. In order to view the service, log into Facebook on your phone or computer and join the group “Joiner-Anderson Live Stream” at: https://www.facebook.com/groups/jafhlive/ If you have any questions; please contact the funeral home @912-764-7725. Friends may sign the online register book at www.joineranderson.com Joiner-Anderson Funeral Home & Crematory of Statesboro is in charge of arrangements.

The family of Mr. Bobby Mack Tootle created this Life Tributes page to make it easy to share your memories.

Send flowers to the Tootle family.