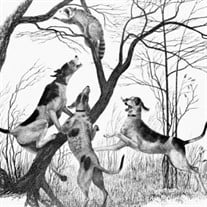 Bobby Williams, 74 of Sylvania passed at his residence Friday evening, April 23, 2021 under the care of Ogeechee Area Hospice surrounded by his family. Born in Sylvania and had attended Screven County High School. From a young age he followed... View Obituary & Service Information

The family of Mr. Bobby Williams created this Life Tributes page to make it easy to share your memories.

Bobby Williams, 74 of Sylvania passed at his residence Friday...

Send flowers to the Williams family.