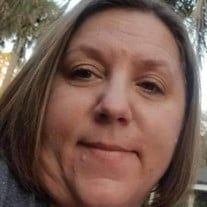 Statesboro, Georgia Mrs. Bonnie Lanier Rushing, 53, died Friday at her residence. Born in Statesboro, Georgia on April 22, 1967 to Gerri and Jack Lanier of Leefield, Georgia. Bonnie was a 1985 graduate of Southeast Bulloch High School and graduated two times from Swainsboro Technical College. Following her education, Bonnie worked briefly with First Bulloch Bank in Statesboro, and later began her career with the Department of Family and Children Services from which she retired in 2017. Bonnie was an active member of the Brooklet United Methodist Church where she was a member of the Tuesday Morning Prayer Group. Bonnie served the church in several capacities and was always willing to lend a helping hand with any event. Bonnie’s greatest love was her Lord and her family. With a servant’s heart, she was always available to help those in need. She prayed for everyone and would contact people offering assistance, prayer and food. She loved her sons and was involved in all of their activities especially with her support for them while in the Boy Scouts, Bonnie was involved and a constant support for her family as volunteers with the Leefield Fire Department. She was preceded in death by her parents, Jack and Gerri Lanier; her paternal grandparents, Felt and Leona Lee Lanier and maternal grandparents, Rufus and Mary Etta Fordham. Surviving are her husband of 27 years, Mike Rushing of Statesboro; two sons, Chad M. Rushing and Travis J. Rushing both of Statesboro; a sister and brother-in-law, Pat Lanier Jones and Larry Jones of Statesboro; her mother-in-law, Betty D. Rushing of Brooklet; two brothers-in-law and their wives, Chuck and Beth Rushing of Statesboro and John and Lyn Rushing of Brooklet; a sister-in-law Suzanne Bunn (Lawrence Lundy) of Flowery Branch, GA; her aunts, Yvonne Plyler of Winter Haven, Florida, Sally Fordham of Lexington, KY and Frances Lanier of Statesboro; many cousins and extended family also survive. The family will receive visitors on Wednesday October 28, 2020, from 4:00pm until 8:00pm in the chapel of Joiner-Anderson Funeral Home in Statesboro. Funeral services will be Thursday October 29, 2020, at 2:00pm in the chapel of Joiner-Anderson Funeral Home with Rev. Chip Strickland and Elder John Scott officiating. For those desiring to view the service, a livestream will be available via Facebook group “Joiner-Anderson Live Stream” at https://www.facebook.com/groups/jafhlive/. Interment will be in Bulloch Memorial Gardens with Rev. Chip Grantham officiating. Pallbearers will be Andy Fordham, Jeremy Fordham, Lee Cromley, Charley Cromley, Butch Willis and Chris Nelson. Honorary Pallbearers will be Lora B. Akins; the members of the Tuesday morning Prayer Group, Lyn Deal, Debbie Cooper and Sharon Pye; her former co-workers, Debra Mikell, Belind Nelson, Sandra Polk, LaDonna Cason, Sandra Dickey, Danny Smith, Tamela Smith, Juile Gillen, Amber Anderson and Raina Mallard. The family requests that memorial contributions be made to Ogeechee Area Hospice, P.O. Box 531, Statesboro, Ga. 30459. Friends may sign the online register book at www.joineranderson.com. Joiner-Anderson Funeral Home & Crematory of Statesboro is in charge of the arrangements.

The family of Mrs. Bonnie Lanier Rushing created this Life Tributes page to make it easy to share your memories.

Send flowers to the Rushing family.