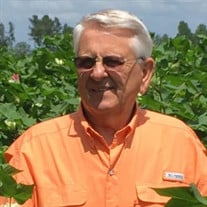 Statesboro, Georgia Brooks Buford Deal left this world to be with his Lord on February 18, 2022 at the Ogeechee Area Hospice Inpatient Facility on Statesboro, after battling a lung condition. He was surrounded by his family. Born July 5, 1942, Buford was born and preceded in death by Brooks and Lena Deal in Statesboro, Georgia. After graduating from Marvin Pittman High, he graduated from Georgia Southern University and then the University of Georgia. He began his teaching career as a technical educator in Printing and Photography at Roosevelt High School in Atlanta. He was later employed by Gwinnett County Schools and retired as a technical educator at Maxwell High School of Technology in Lawrenceville, GA. He operated Deal Printing for 18 years until retirement. He had a passion for teaching people his knowledge of printing. His love of print continued to his end, always feeling the quality of paper. In 2015, he returned to the farm where he grew up in the Clito Community. While residing in the Atlanta area, he was a member of Bethany Primitive Baptist Church. Once he returned to Statesboro, he became a member of Bethlehem Primitive Baptist Church. Buford was an organized, detail oriented man at every task he completed. He loved to share historical facts about any topic or place that was the subject of conversation. He loved to talk to anyone that would listen. He also enjoyed boating, fishing, gardening, fixing items that needed repairing, and riding his golf cart with his granddog, Roy, around the farm. Travel was also always in his plans. His last trip was a two week excursion to the west coast to explore Washington, Oregon, and California with Frances, Clark, and Sally Wryce. He put much thought and documentation into his planning to make it the best, lasting memory for them. He was a kind, humble, patient man striving to serve the Lord and provide for his family. He preferred to serve others before himself. He was the most selfless man and would always arrive at the perfect moment of need. He will be greatly missed by his family. He is survived by his wife of 56 years, Frances Clark Deal, sons-Clark Deal and Durand Deal of Statesboro, daughter in law-Brooke Deal of Statesboro, and his granddaughters- Madeline Deal of Jacksonville, and Sally Wryce Deal of Statesboro; two sisters and brothers-in-law, Aline and Davie Davis of Statesboro and Delta and Robert Newman of Statesboro and several nieces and nephews. Graveside services and burial will be Monday at 2:00pm at Bethlehem Primitive Baptist Church Cemetery with Elder John Scott officiating. Pallbearers will be Davie Davis, Mike Milton, Chris Deal, Danny Woodrum, James Deal and Bennie Mann. The family requests that memorial contributions be made to Ogeechee Area Hospice, P.O. Box 531, Statesboro, Georgia 30459 or Bethlehem Primitive Baptist Church, 210 Jonathan Road, Statesboro, Georgia 30458. Services are streamed using Facebook Live through a private group. Only members of the group will be able to view the service. In order to view the service, log into Facebook on your phone or computer and join the group “Joiner-Anderson Live Stream” at: https://www.facebook.com/groups/jafhlive/ If you have any questions; please contact the funeral home @912-764-7725. Friends may sign the online register book at www.joineranderson.com. Joiner-Anderson Funeral Home & Crematory of Statesboro is in charge of the arrangements.

Statesboro, Georgia Brooks Buford Deal left this world to be with his Lord on February 18, 2022 at the Ogeechee Area Hospice Inpatient Facility on Statesboro, after battling a lung condition. He was surrounded by his family. Born July 5,... View Obituary & Service Information

The family of Mr. Brooks Buford Deal created this Life Tributes page to make it easy to share your memories.

Statesboro, Georgia
Brooks Buford Deal left this world to be...

Send flowers to the Deal family.