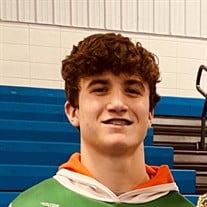 Nevils, Georgia On the morning of October 6, 2020, at his home in Nevils, GA, Camden Mercer Johns, age 16, ran into the wide open arms of his Savior, Jesus Christ. Camden was born on August 16, 2004, in Statesboro, Georgia, to Mr. Gentry Johns and Mrs. Paula Harmon Johns. Camden was the fourth of their five children, and he was a cherished and precious member of their family. Amongst friends and family alike, he was known for his sideways grin, his “shoot from the hip” way of speaking, his loyalty to anything and anyone in which he believed, his dry sense of humor, and, more often than not, his stubborn streak that would rival any that ever has lived. Camden began his schooling at Brooklet United Methodist Preschool in Brooklet, Georgia, and entered Pinewood Christian Academy at the age of four. From there forward, he remained in the Pinewood family where he currently was an honor student in his sophomore year. Camden loved sports and had participated in football, track, cross country, and wrestling. His love for wrestling began in his eighth grade year, and that year, he went on to become middle school state champion. That same year, he placed in state on the varsity team in the 152 class. His freshman year, he was state runner up in varsity wrestling for the 170 class. Ever the barefoot outdoorsman, Camden also loved fishing, exploring, all animals, and working on engines of all kinds. He was a master mechanic for his age, and his most recent project was restoring his great-grandfather’s 1962 Chevrolet truck. During his summers, Camden enjoyed family vacations to Fernandina where they spent countless hours building memories and shark tooth hunting. Somehow Camden always found the most and biggest teeth. As a toddler he had developed an affinity for dressing up as Santa during the Christmas season. He continued this tradition into his teenage years and affectionately was known as “Cammie Claus”. He was a beloved member of Nevils United Methodist Church where he was christened and was loved up in the Word. Camden was preceded in death by his paternal grandparents, Will and Jeanne Johns. He is survived by his parents, Gentry and Paula Johns, his siblings, Trevor, Noah, Forrest, and Ella Johns, his maternal grandparents, Paul and Gail Harmon, all of Nevils, his two uncles and aunts, Ashley and Dia Harmon of Nevils and Evan and Lisa Johns of Evans, GA, his cousins, Keylee and Leyton Harmon, Hali Long, and Owen, Reagan, and Landyn Johns, as well as Amanda Lanier who was a babysitter and like a second mother to Camden. The family will receive visitors on Thursday October 8, 2020, from 2:30pm until 4:30pm in the Pinewood Christian Academy Football Stadium located at 1 Henry Street in Bellville, Georgia. The funeral will follow the visitation at 4:30pm in the stadium. Interment will be Nevils United Methodist Church Cemetery. Pallbearers will be Trevor Johns, Noah Johns, Forrest Johns, Leyton Harmon, Owen Johns, and Truett Roundtree. Honorary pallbearers will be members and coaches of the PCA wrestling team and the PCA sophomore class. Services are streamed using Facebook Live through a private group. Only members of the group will be able to view the service. In order to view the service, log into Facebook on your phone or computer and join the group “Joiner-Anderson Live Stream” at: https://www.facebook.com/groups/jafhlive/ If you have any questions, please contact the funeral home @ 912-764-7725. Friends may sign the online register book at www.joineranderson.com Joiner-Anderson Funeral Home & Crematory of Statesboro is in charge of arrangements.

Nevils, Georgia On the morning of October 6, 2020, at his home in Nevils, GA, Camden Mercer Johns, age 16, ran into the wide open arms of his Savior, Jesus Christ. Camden was born on August 16, 2004, in Statesboro, Georgia, to Mr. Gentry... View Obituary & Service Information

The family of Camden Mercer Johns created this Life Tributes page to make it easy to share your memories.

Send flowers to the Johns family.