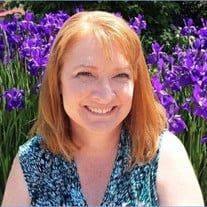 Dr. Camille Françoise Rogers passed away on September 25, 2021, at the age of 57, after a 4.5 year long battle with stage 4 ovarian cancer. She was born on July 27, 1964, in Michigan City, Indiana, and spent her childhood all over the world as a military brat. After graduating from Frankfurt American High School in Frankfurt, Germany, she joined the United States Air Force and served her country while earning her undergraduate degree from Eastern New Mexico University. After she was honorably discharged from the Air Force, she began her career at Georgia Southern University in 1994, where she enriched the lives of everyone she interacted with. Camille earned her Doctorate of Education from Georgia Southern in 2006. During her 27 years as a professor at Georgia Southern, she found a passion for her work and teaching, and dedicated herself to furthering her department, the university, and the lives of her students. Camille was also a True Blue Georgia Southern football fan and attended every Georgia Southern football game she could, even while undergoing surgery and treatment for her cancer. After testing positive for a BRCA 2 gene mutation in 2015, Camille opted to undergo prophylactic surgery in early 2016 to reduce her risk of developing a gynecological cancer. Unfortunately, she was diagnosed with stage 4 ovarian cancer in April 2017. In her brutal 4.5 year long battle, she endured numerous chemotherapy treatments and immunotherapy treatments that allowed her to spend several more years with her loved ones. Her daughters encourage everyone to learn the symptoms of ovarian cancer, as there is no diagnostic test for it. If any of these symptoms present for more than two weeks, please check in with your gynecologist: fatigue, quickly feeling full while eating, bloating, pelvic discomfort, frequent need to urinate, unusual change in bowel habits. September is Ovarian Cancer Awareness Month – Know the symptoms. It’s a silent killer. Camille is survived by many friends and loved ones, including her beloved daughters Rachel Lillian Faith and Sarah Hope. A Memorial Service for Camille will be held at Joiner-Anderson Funeral Home on Tuesday, September 28 at 5pm, with visitation to follow. She asks attendees to wear teal (the color of ovarian cancer awareness) or purple in her memory. She will be buried at Georgia National Cemetery in Canton, GA. In lieu of flowers, Camille wishes for donations to be made to the Teal Butterfly Challenge for Ovarian Cancer Awareness (www.tealbutterfly.org) or to Statesboro Safe Haven (https://safehavenstatesboro.org/) in her memory. Friends may sign the online register book at www.joineranderson.com Services are streamed using Facebook Live through a private group. Only members of the group will be able to view the service. In order to view the service, log into Facebook on your phone or computer and join the group “Joiner-Anderson Live Stream” at: https://www.facebook.com/groups/jafhlive/ If you have any questions; please contact the funeral home @912-764-7725. Joiner-Anderson Funeral Home & Crematory of Statesboro is in charge of arrangements.

Dr. Camille Françoise Rogers passed away on September 25, 2021, at the age of 57, after a 4.5 year long battle with stage 4 ovarian cancer. She was born on July 27, 1964, in Michigan City, Indiana, and spent her childhood all over the world... View Obituary & Service Information

The family of Dr. Camille Françoise Rogers created this Life Tributes page to make it easy to share your memories.

Send flowers to the Rogers family.