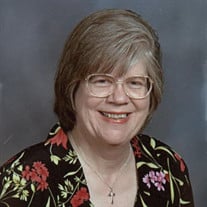 Mrs. M. Carol Lockwood Dean, age 70, died on September 8th 2021 at East Georgia Regional Medical Center in Statesboro. Carol was born on September 22nd 1950 in Cincinnati, OH to the late Mr. Don Lockwood and Mrs. Ruth Prine Lockwood. She was raised in New Orleans, LA and attended John F. Kennedy High School, graduating in 1968. She went to the University of New Orleans for 2 years before working as a Veterinary Technician, engaging with her love of animals. She and her husband, Cleon Dean, moved to Statesboro in 1992 and she finished her B.S. in Anthropology at Georgia Southern University in 1998. Carol loved cross-stitch and crochet and often won first place ribbons for her work. She also used her crocheting skills to make caps for missionaries to give to babies in the Congo, the caps were different colors which told the story of God’s Redemption. Carol was also a member of the Beta Sigma Phi sorority. She was preceded in death by her parents and also her siblings, James Phillip “Jimmy” Lockwood and Donna Marsh. She is survived by her loving husband of 29 years, Cleon E. Dean, her niece and nephews, Donna Howard, Robert Marsh and Lawrence Marsh, great nieces and nephews, Brandi, Kirsten, Christopher, and Gregory, her aunt and uncle, Nancy and Carl Dolce, her aunt, Sister Carla Dolce O.S.U. aka Sylvia, her cousins, John Dolce and Carla (Georgios) Stavridis, her mother in law, Paula Gordon, her brother-in-law, Clifford and Karen Dean and their children, William (Ruth) Dean and Peter Dean, and her sister-in-law, Claire (Bruce) Henley and their children, Curtiss (Colby) Henley, Celia (Jeff) Melson, and Caitlin Brown, as well as many other extended family members. A memorial service will be held on Saturday, September 25th at 2:00pm at Joiner-Anderson Funeral Home in Statesboro, GA with Pastor Jody Bryant officiating. The family will receive visitors following the service. The family requests that any memorial contributions be made to the Lymphoma Research Foundation at https://lymphoma.org/ Friends may sign the online register book at www.joineranderson.com Joiner-Anderson Funeral Home & Crematory of Statesboro is in charge of arrangements.

The family of Mrs. Carol Lockwood Dean created this Life Tributes page to make it easy to share your memories.

Send flowers to the Dean family.