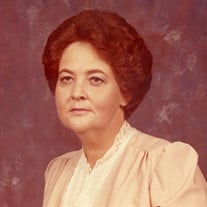 Portal, Ga. Carole Bobette Robertson Brown passed peacefully into her eternal home on Friday, January 29, 2021, at the age of 79. A beloved wife, mother, grandmother and friend to many, her life was a testimony of her faith and her love for the Lord was evident through song and music and her daily walk with Him. A native of Portal, Georgia, she was born November 21, 1941 to the late Evelyn Joiner. Mrs. Brown was a 1960 graduate of Portal High School. She continued her education at Georgia Southern College where she earned both her bachelor and masters degree in English Education. After several years in public education, Mrs. Brown returned to the Georgia Southern University Learning Resources Center where her passion for education was evident in the lives of countless students she touched and tutored for many years. After retiring in 2007, Mrs. Brown devoted the remainder of her life to loving her family while serving the Lord. She was a member of the Portal United Methodist Church and faithful in her attendance to Aaron Worship Center in Portal, Ga. Survivors include her husband of 59 years, Bill Brown, son TIm Brown (Kim), daughter Shelley Brown Parker and son Noel Brown (Laura) all of Portal, Ga., 5 grandchildren, Trevor Brown, Joshua Brown, Jared Brown, Dakota Brown, & Elaina Parker, 3 great grandchildren, and her 2 very special fur babies, Taco and Bella. Active Pallbearers will be Mitch Johnson, Tony Usry, Frank Smith, Torre Parker, Dale Eason, & Danny Eason. The family will receive visitors on Sunday from 3:00pm until 5:00pm at Joiner-Anderson Funeral Home in Statesboro. Funeral services will be held Monday at 11:00am in the chapel of Joiner-Anderson Funeral Home with Pastor Thomas Hendrix officiating. In lieu of flowers, memorial contributions, if so desired, may be made to the Statesboro Bulloch County Humane Society, P.O. Box 581, Statesboro, Georgia 30459. Friends may sign the online register book at www.joineranderson.com. Joiner-Anderson Funeral Home & Crematory of Statesboro is in charge of the arrangements.

Portal, Ga. Carole Bobette Robertson Brown passed peacefully into her eternal home on Friday, January 29, 2021, at the age of 79. A beloved wife, mother, grandmother and friend to many, her life was a testimony of her faith and her love for... View Obituary & Service Information

The family of Carole Bobbette Robertson Brown created this Life Tributes page to make it easy to share your memories.

Send flowers to the Brown family.