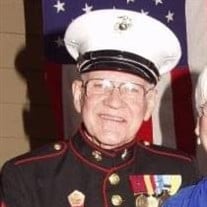 Statesboro, Georgia On June 3, 2021 Charles Frank Young, also known as Charlie, Chuck, Chal, Bud, Dad and Poppop passed away peacefully at Ogeechee Area Hospice in Statesboro, GA. Born and raised in Philadelphia, PA he was a loyal Phillies fan to the end, often interrupting dinner or conversations to watch the game. He learned to box in the streets of Philly and that fighting spirit never left him. In fact it carried over into his military service where he served faithfully in the Marines for 4 years, proudly serving in the Korean War. During this time he participated in many fights as a competitive, lightweight boxer with the Marines where, because of his size, was often underestimated. A mistake only made once, I assure you. Just ask the guy who challenged him after duty one night, resulting in a fist fight that wound up with both men rolling off a cliff, Charlie walking away with only a swollen hand and the other guy spending the next couple of days in sick bay. Anything Charlie did, he did with everything he had, good or bad. In June of 1951, Charlie was leaving for Camp LeJune for training and wouldn’t be back until his next leave that December. As the train was pulling away he shouts to his love, Gertrude, “When I get back, let’s get married!” And with that Gert planned a wedding in six months and they were married on December 29, 1951. After returning from Korea they settled in Almonesson, NJ in a house he built himself. They went on to have four children and enjoyed 60 years together before Gert passed in 2012. He retired from Texaco after 30 years and went on to work security for the Sheraton Resort on Wilmington Island for several years. A job that kept him fit and young and that he enjoyed. He always kept himself in top shape, priding himself in his health. If I had a dollar for every time a doctor told him “you’re the healthiest 89/90/91 year old I’ve ever seen”, well, we’d be having this conversation on a yacht in the Mediterranean. He loved soccer and enjoyed coaching many teams in Washington Township, NJ over the years, heavily involved in bringing the first indoor soccer team to the area, the Philadelphia Fever as well as the outdoor team, the Philadelphia Fury. His presence was large and his absence will be felt by many. Semper Fi, Marine. He was preceded in death by his parents Charles and Ethel Mae Dunn Young. his wife, Gertrude Madalon Perrett Young, a daughter, Dale Audrey Gaunt, a son, Hunter Andrew Young, sister Eugenia Majka and brother Robert Young Jr. Surviving are two daughters, Valerie (James) Johnson and BethAnn (Walter) Cason; his beloved companion of eight years, Thelma Steele; grandchildren ,Andrew (Jessica) Johnson, Melanie (Michael) Hayden, Paul C. Trace, Chase Young, Danielle Young and six great-grandchildren. Graveside service with military honors will be Tuesday, June 8, 2021 at 11:00 am at Bulloch Memorial Gardens with Walter Cason officiating. Friends may sign the online register book at www.joineranderson.com. Joiner-Anderson Funeral Home & Crematory of Statesboro is in charge of arrangements.

The family of Mr. Charles Frank Young created this Life Tributes page to make it easy to share your memories.

Send flowers to the Young family.