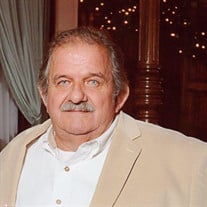 Charlie Franklin Hulsey Statesboro, Georgia MSgt Charlie Franklin Hulsey, United States Army, (Ret) age 76, was surrounded by friends and family in his home as he entered heaven on September 7, 2021, under the care of Ogeechee Area Hospice. Charlie was a faithful lifelong member of Clito Baptist Church. At the age of 17, he joined the United States Army and served his country for 33 years including his years of service in the Army Reserves and National Guard. He retired as a Master Sergeant in 1995. Charlie was also a meat cutter and store manager for Winn Dixie and later for David’s Meats. In 1983, he married the love of his life, Cindy Culp and they made Bulloch County their home where they started their family business, Bestway Movers. Charlie was preceded in death by a daughter, Cynthia Charlene and his parents Alonzo and Josie Hulsey, brother and sister-in-law Joe and Maxine Hulsey, sister Florette Hulsey and several nieces and nephews. In addition to his wife Cindy, he is survived by his sons Charlie Franklin Hulsey Jr. and Lamar Hulsey; a sister Patty (Charles) Jones and several nieces and nephews. Visitation will be Thursday, September 9, 2021 from 5:00 pm until 8:00 pm at Joiner-Anderson Funeral Home. The funeral will be held on Friday in the chapel of Joiner-Anderson Funeral Home at 11:00 with Rev. Chandler Bland and John Chisari officiating. Pallbearers will be Tracy English, Chris Culp, Garrett Bland, Barnes Rollins, Jr., Sam Culp, Colin Culp and Robbie Hunnicutt. Honorary pallbearers will be all nieces and nephews. Interment will be in Clito Baptist Church Cemetery. The family requests that memorial contributions be made to Clito Baptist Church Building Fund 10062 Clito Rd., Statesboro, GA 30461 or to Ogeechee Area Hospice, P.O. Box 531, Statesboro, GA 30458. Services are streamed using Facebook Live through a private group. Only members of the group will be able to view the service. In order to view the service, log into Facebook on your phone or computer and join the group “Joiner-Anderson Live Stream” at: https://www.facebook.com/groups/jafhlive/ If you have any questions; please contact the funeral home @912-764-7725. Friends may sign the online register book at www.joineranderson.com Joiner-Anderson Funeral Home & Crematory of Statesboro is in charge of arrangements.

The family of Mr. Charlie Franklin Hulsey created this Life Tributes page to make it easy to share your memories.

Send flowers to the Hulsey family.