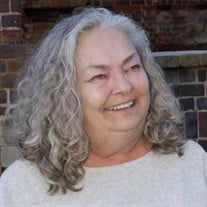 Statesboro, GA Mrs. Debra Smith Pease, age 66, died Friday March 4th, 2022, after a brief illness at East Georgia Regional Medical Center. She was born in Savannah, GA and was raised in Hinesville, GA where she graduated Bradwell Institute in 1973. She attended college at Georgia Southern College where she earned a Bachelor of Science in Education in 1978. She met her husband, Walter, there and they were married later that year. She began her teaching career in Claxton, GA and has also taught at Marvin Pittman Laboratory School, and Bulloch Academy. She opened a leather shop in downtown Statesboro called Westchester Leatherworks where she created and sold beautiful pieces such as saddles and tack. Later she worked for Southern States Cotton Gin where she retired in 2001. Over the years, she has carried many titles. But the one that defines her the best is artist. She loved all things beautiful and interesting. She enjoyed creating things from many different mediums and was extremely talented. She enjoyed history, music, a good book, movies, fishing, ghost stories (well any good story really), riding (horses, four wheelers, motorcycles, cars), traveling, gardening, animals of all kinds and cooking. She was very involved in the Kiwanis Club of Statesboro where she played a key role in the fair and livestock program. She was also the first ever female Fair Chairman. She served as secretary of the Georgia Hereford Association and was a member of the Georgia and national Pollettes for the Hereford Association. She was also a member of the Deep South Orchid Society. Most of all, she was a good mama, and a devoted wife. She was preceded in death by her parents, Homer & Omagene Smith of Hinesville, GA. Surviving is her husband, Walter Pease, Jr. of Statesboro, GA, daughters, Leslie Pease and Emily Grooms (husband Trent) of Statesboro, GA., grandchildren, Hannah & Grayson Pease; Emmett, Caroline & Gemma Grooms, brother, Brian (Shay) of Townsend, GA and their sons Cale (Morgan) of Savannah, GA, Cameron (Katy) of Hinesville, GA and Carson of Savannah, GA., brother and Sister-in-Law Jane (Danny) Hagan of Statesboro, GA and their daughters Susan (Charles) Patrick of Greenville, SC, Lisa (John) Sisson of Washington, GA and Phillip (Lauren) Hagan of Savannah, GA. The family will receive visitors on Friday March 11th, 2022, from 11:00am until noon with funeral services immediately following at Joiner-Anderson Funeral Home, Thomas Hendrix officiating. All friends and family are invited to join in food and fellowship at the Middleground Community Building following the service. She will be cremated with a celebration of life and ashes ceremony to be held at a later date Honorary Pallbearers: Paul Smith, Lee Mobley, Michael Gay, John Fields, Jess Smith, Haze Grooms, Kevin Boyd. Alternative to flowers, please consider donating the American Kidney Fund 6110 Executive Boulevard Suite 1010 Rockville, MD 20852. Friends may sign the online register book at www.joineranderson.com Joiner-Anderson Funeral Home & Crematory of Statesboro is in charge of the arrangements.

The family of Mrs. Debra Smith Pease created this Life Tributes page to make it easy to share your memories.

Send flowers to the Pease family.