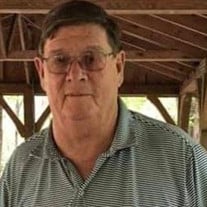 Mr. Donald Brooks "Don" Sheffield, Sr., passed away at the Riverview Health & Rehabilitation Center on October 22, 2021 in the company of his family. Born in Millen in 1948, he was the son of the late Charlie Brooks and Virginia Moore Sheffield. He was reared in the Greenhill Community and graduated from Screven County High in 1966. He attended Brewton-Parker College where he studied business. He worked for Stone & Webster Engineering starting in 1974, then returned home in 1987 and began work with Georgia Pacific, formerly Fort Howard, and retired from the Savannah River Site as purchasing manager. Never one to remain idle, only one and a half years after retiring he began a new career working with the Screven County Sheriff’s Office, and officially retired on November 5, 2020. He served his country as a Veteran of the Air Force and the Air Force Reserve and was a member of the Little Ogeechee Baptist Church where he served as Deacon for many years, and a member of the Masonic Lodge #121 in New York. He enjoyed hunting, playing golf, fishing, spending time at the racetrack, working and socializing. He is preceded in death by his sister, Barbara Sheffield Hinson, and a nephew, Bobby DeWayne Sheffield. He is survived by his children, Shannon (David) Owens of Sylvania, Donald Brooks (Daisy) Sheffield, Jr. of Walterboro, SC, Todd (Deena) Sheffield of Sylvania, brother, Gene (Maxine) Sheffield of Sylvania, brother-in-law, Al Hinson of Springfield, his grandchildren; Ashley Hendrix, Heather Hendrix, Joni Hendrix, Jesse Hannah Sheffield, Kendyl Sheffield, and Chandler Sheffield, and the mother of his children, Kathy Sheffield, Mount Pleasant, SC. Visitation will be held on Monday, October 25, 2021 at the Screven Chapel of Joiner Anderson Funeral Home from 11:00am to 1:00pm. Services will be at 1:00pm on Monday in the Screven Chapel of Joiner Anderson Funeral Home with Rev. Vernon Edenfield officiating. Interment will follow at the Screven County memorial Cemetery. Pallbearers will be Robbie Underwood, Joey Owens, Blake Evans, Ron Newman, Foster Wylie, Joey Carmon, and Lewis Sheley. Honorary pallbearers will be Jimmy Ondriezek, Thomas Lee, and John Whatley. Friends may sign the online register book at www.joineranderson.com Joiner Anderson Funeral Home Screven Chapel is in charge of all arrangements.

Mr. Donald Brooks "Don" Sheffield, Sr., passed away at the Riverview Health & Rehabilitation Center on October 22, 2021 in the company of his family. Born in Millen in 1948, he was the son of the late Charlie Brooks and Virginia Moore Sheffield.... View Obituary & Service Information

The family of Mr. Donald Brooks "Don" Sheffield Sr. created this Life Tributes page to make it easy to share your memories.

Send flowers to the Sheffield family.