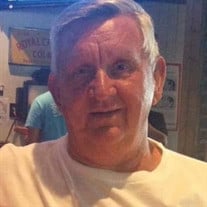 Donald Ray “Don” Taylor, age 82, passed away unexpectedly on Tuesday, December 14, 2021. Don was born in Poplar Bluff, Missouri in 1940 to Russell and Ollie Taylor, who both preceded him in death. His brothers, Ivan Taylor, Carol Taylor, Jerry Taylor and Richard Taylor also preceded him in death. Don served his country with honor as a U. S. Marine Corp Veteran from 1958-1962. After the military Don began working for Snider's IGA in his home town and it blossomed into a lucrative career as a wholesale meat and dairy buyer for Wetterauer Foods and T. J. Morris Company (now Nash Finch) for five decades up until his retirement. Don is survived by his loving wife of 57 years Melva Taylor (Jenkins), his daughter Stacey Taylor and his granddaughter Piper Elizabeth Jones all of Statesboro and whom his entire life revolved around. Don is also survived by his sisters; Marie Groffel from California, Diana Reed (Lee), and Vicki Lynn Barton (Alan), all from Poplar Bluff, Missouri, brothers; Bob Taylor, and Paul Taylor (Connie), both from Poplar Bluff, Missouri. Don is also survived by his best friend of 35 years Roger Sapp from Macon, Georgia. After retirement Don spent most of his time being a doting husband and Papaw. He lived for his family and their needs, as well as wants, and always did it with a smile on his face. Don also enjoyed fishing, spending time with his work friends, and was a huge supporter and fan of St. Louis Cardinals baseball and Kentucky Wildcats basketball. A memorial service will be on Sunday, December 19, 2021 at 1:00pm at Joiner Anderson Funeral Home with Pastor Rusty Manning officiating. Friends may sign the online register book at www.joineranderson.com. Joiner-Anderson Funeral Home & Crematory of Statesboro is in charge of the arrangements.

Donald Ray &#8220;Don&#8221; Taylor, age 82, passed away unexpectedly on Tuesday, December 14, 2021. Don was born in Poplar Bluff, Missouri in 1940 to Russell and Ollie Taylor, who both preceded him in death. His brothers, Ivan Taylor, Carol... View Obituary & Service Information

The family of Mr. Donald Ray "Don" Taylor created this Life Tributes page to make it easy to share your memories.

Send flowers to the Taylor family.