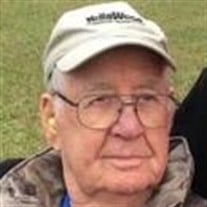 Mr. Elbert Dent Newton, age 92, passed away on Friday, June 4th 2021 at Ogeechee Area Hospice following a long illness. Dent was born on April 2nd, 1929 in Bulloch County to the late Mr. Barnett Joshua Newton and Mrs. Pearl Collins Newton. Dent attended Statesboro High School where he played halfback on the 1945 “Amazing 13” football team, and was named Mr. Statesboro High School, graduating in 1946. Following high school, he served in the Air National Guard for several years before returning to Statesboro to attend Georgia Teachers College, currently Georgia Southern University, from which he earned a Bachelor’s Degree in Business Administration. He worked for Rockwell as a purchasing agent for 7 years and in 1961 purchased the Ford Tractor dealership in Statesboro and ran that business until retiring in 1985 to his farm in Brooklet. He retired not to sit at home and do nothing, but rather to make his home and land in Brooklet better than he found it. Up until his mid 80’s when he had a stroke, you could find Dent on one of his Ford tractors mowing his lawn, digging, or backhoeing something on his property. He loved home and that’s where he wanted to be unless he was at “The Hunting Club.” Dent was a very active and a loyal member for the last 50 years of the Thompson’s Pasture Hunting Club which is the oldest Hunting Club in Georgia, over 100 years old. He enjoyed deer hunting every season but as he would often tell you, it was more of a social club that likes to hunt. For him it was about the members and friendships that they shared and they honored him for his long years of service and dedication. Dent was preceded in death by his parents as well as his brothers, Doy Newton and Hubert Newton, and his sister, Rita Chester. Dent is survived by his wife of 26 years, Juanita Denmark Newton of Brooklet, two daughters, Nancy Newton Thomas (Lindsay) of Screven, GA and Becky Newton Miller (Mike) of Jacksonville, FL, two grandsons, Matthew Legette Miller and Louis Denton Miller, both of Jacksonville, his step-children, Gary Denmark (Laurie), Vicki Marks (Ladd), Sue Strickland (Terry), and Lynn Soliday (Mark), and his step-grandchildren, Daniel Denmark (Mindy), Hannah Nevil (James), Sinclair Marks, Sydney Marks, and Brittany Guest (Greg). The family gives thanks to his faithful and devoted caregivers over the last 18 months, Gloria Dekle and Sharhonda Thomas. The family will receive visitors on Monday, June 7th from 2:00pm until 3:00pm at Joiner-Anderson Funeral Home in Statesboro. The funeral will follow visitation at 3:00pm in the funeral home chapel with Pastor Chip Strickland officiating. Interment will be at Eastside Cemetery. Pallbearers will be Clyde Wilson, Matt Miller, Lou Miller, Phil Denmark, Jimmy Deloach, and Patrick Newton. The family requests that any memorial contributions be made to Ogeechee Area Hospice, PO Box 531, Statesboro, GA 30459, or to Brooklet United Methodist Church, 201 Parker Ave., Brooklet, GA 30415. Friends may sign the online register book at www.joineranderson.com Joiner-Anderson Funeral Home & Crematory of Statesboro is in charge of arrangements.

The family of Mr. Elbert Dent Newton created this Life Tributes page to make it easy to share your memories.