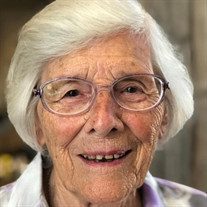 Elizabeth Ann “Betty” (Bemis) Robarts, 99, formerly of Georgia, joined her beloved husband in Heaven on Saturday, January 15, 2022, at Harmony at State College. Born on December 6, 1922, in Nashwauk, MN, she was the daughter of the late Edwin L. and Pauline (Hall) Bemis. On June 23, 1945, in Dayton, OH, she married Edward W. Robarts, who preceded her in death in August of 2009. Betty graduated in 1940 from Nashwauk High School. She was a nationally ranked swimmer in high school and was on track to compete in the Olympics while attending Butler College. She left college because she wanted to make a difference, therefore, at the young age of 20, Betty enlisted with the United States Navy Reserve, also known as the “Women Accepted for Volunteer Emergency Service” (WAVES) during World War II. While stationed in Dayton, Ohio, she worked a small part of the “Bombe” that used to decoded the Germany Enigma machine. Her group was sworn to secrecy until 1995 when they were informed of how they helped shorten WWII. She loved to tell “her story” and was a true pioneer for women in the military. She and her work in the military are mentioned in many books. After her time in the service, she became a homemaker and wife. Betty was of the Methodist Faith and enjoyed teaching nursery school. She was a member of the Woman’s Veterans Association and volunteered with her husband at the Mighty Eighth Air Force Museum in Pooler, Georgia. From 1985 until 2009, she and her husband had a 222-acre farm in Georgia. They spent summers taking their grandchildren on RV trips and traveling all over the world. To her, faith and family came first. Although she led an incredible life, she remained humble and true to herself. Betty is survived by her daughters, Sarah A. Bissonette and her husband, Mark, of Ft Pierce, FL and Pauline R. Nicosia and her husband, Salvatore, of Spring Mills; eight grandchildren; and 14 great grandchildren with one more on the way. Along with her parents and husband, Betty was preceded in death by her son, John Edward Robarts; her granddaughter, Katherine “Katy” Stinnett; and siblings, John Bemis and Lorraine Bemis. Betty was the last of her generation. A memorial service is being planned at a later date at the Mighty Eighth Air Force Museum. In lieu of flowers, memorial contributions can be made in Betty’s memory to the Mighty Eighth Air Force Museum, PO Box 1992, Savannah, GA 31402 or contact them at 912-748-8888.

The family of Elizabeth Ann "Betty" Robarts created this Life Tributes page to make it easy to share your memories.

Send flowers to the Robarts family.