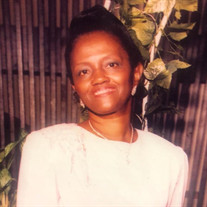 St. Marys & Statesboro, Georgia Elizabeth Johnson, age 84, passed away, Sunday, August, 15, 2021 at Southeast Georgia Health System in Brunswick. A native of Leslie, Georgia, she was one of eight children born to the late J. C. and Mary Alice Moreland Johnson. Elizabeth began her career in 1972 as a CNA and retired from The Daughters of Jacob Nursing Home in Bronx, NY after over 30 years of service. In the early 2000’s she moved to Georgia to be closer to her family. She was a member of the Statesboro Kingdom Hall South where she attended until 2017 when she moved to St. Marys. Elizabeth enjoyed knitting, crocheting, sewing and gardening. She was preceded in death by her parents, a son, Anthony Henry, two brothers and one sister. Surviving are two sons and a daughter-in-law, Alvin Henry of Statesboro, and Andre and Kathy Ferebee of St. Marys; seven grandchildren and 13 great-grandchildren; siblings, Jessie Johnson of Bronx, NY, Pauline Johnson, of Americus, Ga., Julius Johnson of Albany, Ga., and Andrew Johnson of Statesboro, Ga.. A memorial service will be held on Saturday, August, 21 at 2:00pm at Joiner Anderson Funeral Home in Statesboro. For those that cannot attend, South Statesboro is inviting you to a scheduled Zoom meeting for their part of the service. Follow the link below: Topic: Elizabeth Johnson Memorial Time: Aug 21, 2021 02:00 PM Eastern Time (US and Canada) Join Zoom Meeting https://jworg.zoom.us/j/89636165406?pwd=MlN6b1l4bE4xWjQ4czdCeXgvUExpUT09 Meeting ID: 896 3616 5406 Password: 499203 You may also view the memorial service by going to Facebook and join the group “Joiner-Anderson Live Stream” at: https://www.facebook.com/groups/jafhlive/ . Friends may sign the online register book at www.joineranderson.com. Joiner-Anderson Funeral Home & Crematory of Statesboro is in charge of arrangements.

The family of Ms. Elizabeth Johnson created this Life Tributes page to make it easy to share your memories.

Send flowers to the Johnson family.