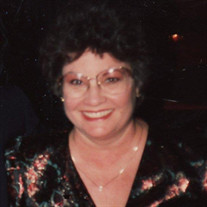 Mrs. Elizabeth “Bette” Davis Paulk, age 80, died Monday, March 28th, 2022 at Ogeechee Area Hospice Inpatient Facility, surrounded by her family. Mrs. Paulk was born in Atlanta, GA on July 27th, 1941. She spent her formative years in Fitzgerald, GA where she was a cheerleader for the Purple Hurricanes and played trumpet in the high-school band. After graduation, she married the love of her life, the late Kenneth Douglas Paulk of nearby Ocilla, GA, her husband of over 50 years. Their family moved to Statesboro in 1975 when Mr. Paulk was district manager for American General Insurance Company. Mrs. Paulk spent her career at the Law Office of Allen, Edenfield, Brown, and Wright, and later as executive assistant to the registrar at Georgia Southern College. Mrs. Paulk was an active member of First Baptist Church of Statesboro and played the trumpet in the church orchestra on Sunday mornings. She was a member of the Garden Club of Statesboro and also volunteered as a Pink Lady at East Georgia Regional Medical Center. She and her husband were also members of the St. Catherine’s Island Fishing Club. Mrs. Paulk remained lifelong friends with a group of elementary school mates known as “The Big Chill” group. She enjoyed spending time with a special group of ladies from Statesboro, who became sisters as they traveled together, and these ladies have remained by her side. She loved traveling, especially time spent at the beach, hiking, fishing, dancing, working in her flower beds, and swimming in her pool. She will be remembered by all as a loving wife, mother, grandmother, and friend. In addition to her husband, Mrs. Paulk was preceded in death by her parents, Martin Julius Davis and Elizabeth Malcolm Davis, of Fitzgerald. She is survived by her two daughters and sons-in-law, Fayebeth and David Ball, and Allison and Keith Corbin, her son, Ken Paulk, all of Statesboro, seven grandchildren, Rachel Corbin Tootle (Craig) of Guyton, Lauren Ball Whitfield (Josh), David Ball II, Kenneth Candler Ball, Kenneth Daniel Paulk, Andrew Davis Paulk, and Christopher William Paulk, all of Statesboro, two great-granddaughters, Harper and Emery Whitfield, a sister and brother-in-law, Julia and William Davis of Abbeville, GA, two nephews and their spouses, Jason and Keisha Davis and Chad and Hailey Davis, as well as three great-nephews, Rhett Davis, Reed Davis, and Ryder Davis. The family will receive visitors on Thursday from 2:00pm until 3:00pm at Joiner-Anderson Funeral Home in Statesboro. The funeral will follow at 3:00pm with Dr. John Waters officiating, assisted by Ralph Cowart. Interment will be in Bulloch Memorial Gardens. Pallbearers will be David Ball II, Candler Ball, Daniel Paulk, Drew Paulk, Chris Paulk, Josh Whitfield, and Craig Tootle. Mrs. Bette and her family would like to extend a special “thank you” to Ralph Cowart and all of the staff and caregivers for the love and care she received while a resident of Southern Manor. The family requests that any memorial contributions be made to Ogeechee Area Hospice, PO Box 531, Statesboro, GA 30459. “During the last three weeks Ogeechee Area Hospice became home for all of us. Each and every one there helped our family through our mother’s departure from this earth, into heaven. There truly are Angels among us.” Friends may sign the online register book at www.joineranderson.com Joiner-Anderson Funeral Home & Crematory of Statesboro is in charge of arrangements.

The family of Mrs. Elizabeth "Bette" Davis Paulk created this Life Tributes page to make it easy to share your memories.

Send flowers to the Paulk family.