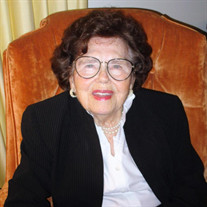 OBITUARY MRS. ELIZABETH PRATT-HUTCHERSON Mrs. Elizabeth Pratt-Hutcherson, a retired schoolteacher and widow of two ministers, died Thursday, April 8, at Ogeechee Area Hospice in Statesboro. Known as “Libby” to friends and family, she was 96 years old and had recently been battling the effects of Parkinson’s Disease. The former Lila Elizabeth Lee, daughter of Horace and Clara Lee, was born and spent her childhood on a farm near Newington in Screven County. A graduate of Newington High School, she attended what became Armstrong State College in Savannah. In 1944, she married the Rev. Frank T. Pratt, pastor of her family’s church, North Newington Baptist. Shortly thereafter, the couple moved to Pooler, where Rev. Pratt became pastor of First Baptist Church and where, in 1948, their son, Ronald, was born. In late 1949, Mrs. Pratt-Hutcherson and her family moved to Missouri, where Rev. Pratt pastored churches, mostly in the St. Louis area, for the next 35 years. For many of those years, Mrs. Pratt-Hutcherson taught kindergarten in suburban St. Louis. Upon their retirement in the mid-1980s, Mrs. Pratt-Hutcherson and her husband relocated, first to Screven County and then to Statesboro. The couple joined First Baptist Church of Statesboro, where both taught Sunday School classes until Rev. Pratt’s death in 1996. Throughout this period, Mrs. Pratt-Hutcherson was a faithful caregiver to her husband, who was frequently hospitalized with heart-related illnesses. In 1998, Mrs. Pratt-Hutcherson married Dr. Guy Hutcherson, a retired district superintendent of the United Methodist Church and a former pastor of First UMC in Statesboro. She continued to remain active in her church, First Baptist, teaching Sunday School classes, while also participating in various activities at First UMC. Dr. Hutcherson died in 2001. Mrs. Pratt-Hutcherson remained in her Statesboro home for several years before moving to Southern Manor Retirement Inn in 2018. She relocated to Ogeechee Area Hospice in late 2020. “Miss Libby” is remembered by her many friends in Statesboro and elsewhere for her vibrant, dynamic personality and her wonderful sense of humor. In addition to her son, Ronald, of Statesboro, Mrs. Pratt-Hutcherson is survived by a stepdaughter, Ann Hutcherson, of Atlanta, and several nieces and nephews. A private graveside service and burial will be Wednesday at North Newington Baptist Church Cemetery with Dr. H. William Perry officiating. The family requests that memorial contributions be made to Ogeechee Area Hospice, P.O. Box 531, Statesboro, Ga. 30459. Friends may sign the online register book at www.joineranderson.com. Joiner-Anderson Funeral Home & Crematory of Statesboro is in charge of the arrangements.

The family of Mrs. Elizabeth Pratt-Hutcherson created this Life Tributes page to make it easy to share your memories.

Send flowers to the Pratt-Hutcherson family.