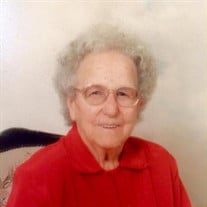 Statesboro, Georgia Mrs. Fannie Frances Dean Faircloth, age 105, died Wednesday February 17, 2021 at her home surrounded by her family and under the care of Regency SouthernCare Hospice. She was born and raised in Portal, Georgia. As a young woman during World War II, she moved to Savannah and worked as a welder for the shipyard. She later returned to Portal and worked for several years with Union Camp and Braswell Foods. Fannie moved to Statesboro in 2004. She was known for her love of fishing and cooking, especially the large family meals every Sunday, feeding 20 or more people. She was a very independent person and had lived alone in her home until becoming ill four weeks ago. Mrs. Faircloth was a member of the Aaron Worship Center in Portal, where she initiated the program “ Offerings for Christ’s Birthday” She was preceded in death by her parents, Malachi and Mary Alma Dean; her husband, Cole Faircloth; 2 step sons, CB Faircloth and John Paul Faircloth; a grandson, Wayne Bowen; a step granddaughter, Jeanie Faircloth and a step grandson, Chuck Faircloth. The family would like to thank Regency SouthernCare Hospice for the love and care they provided, especially Jan, Mary and Sara. Surviving are a daughter and son-in-law, Cheryl and Julian Bowen of Statesboro; a son and daughter-in-law, Sammy and Lynn Goodman of Brooklet; nine grandchildren, Annette and Bobby Edenfield, Tracy and David Edwards, April and Kevin Nicklay, Mark and Angela Goodman, Alton Goodman, Todd and Jennifer Ray, Brad and Jennifer Goodman, Liz Faircloth and Susie Wall; 20 great grandchildren, 15 great great grandchildren and one great great great grandchild. She is also survived by many nieces and nephews that were like her own children. The family will receive visitors on Saturday February 20, 2021, from 1:00pm until 2:00pm in the chapel of Joiner-Anderson Funeral Home in Statesboro. Funeral services will follow the visitation in the chapel at 2:00pm with Her granddaughter Annette Edenfield officiating assisted by Rev Lelon Jeffers. Interment will be in Pleasant Hill Methodist Church Cemetery in Portal. Pallbearers will be Taylor Edenfield, Trey Edenfield, Tyler Henry, Alton Goodman, Mark Goodman and Jack Henry. Friends may sign the online register book at www.joineranderson.com. Joiner-Anderson Funeral Home & Crematory of Statesboro is in charge of the arrangements.

Statesboro, Georgia Mrs. Fannie Frances Dean Faircloth, age 105, died Wednesday February 17, 2021 at her home surrounded by her family and under the care of Regency SouthernCare Hospice. She was born and raised in Portal, Georgia. As a young... View Obituary & Service Information

The family of Mrs. Fannie Frances Dean Faircloth created this Life Tributes page to make it easy to share your memories.

Send flowers to the Faircloth family.