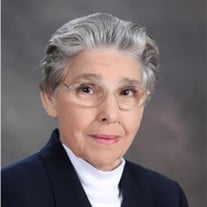 Mrs. Frances Bonnett Aaron, age 92, died Monday morning at Southern Manor Retirement Inn. She was a native and lifelong resident of Bulloch County, born on June 26th 1929 to the late Mr. Lemuel Bonnett and Mrs. Julia Cross Bonnett. She was a 1946 graduate of Portal High School and attended Georgia Teachers College for one year. In September 1947, Frances entered Crawford W. Long Hospital Nursing School in Atlanta, where she received her degree as a Registered Nurse, in 1950. Frances returned to Bulloch County and worked as a registered nurse at the Bulloch County Hospital, and served as the nursing supervisor for one year. In July of 1951, she began working full time for Dr. Johnny Deal at his practice in Portal until January of 1955. In 1958 she accepted the position as Director of Nursing at Candler County Hospital, until 1962. In August of 1963, Frances Organized the LPN Nursing School at Swainsboro Technical College in Swainsboro. Frances later did private in- home nursing care for many years. In December of 1996 she began working with Joiner-Anderson Funeral Home as a greeter and funeral attendant and worked until she retired at the age of 90 as the funeral home answering service. She was a member of Poplar Springs Baptist Church in Portal and an active member of her Sunday school class. Frances was preceded in death by her husband, Phil Aaron and her parents. She is survived by her daughter, Camie Aaron of Portal, GA; two sisters, Edith B. Jarriel of Jacksonville, FL and Christine B. Dunaway of Aiken, South Carolina; as well as several nieces and nephews. The family will receive visitors on Wednesday from 5:00pm until 8:00pm at Joiner-Anderson Funeral Home in Statesboro. The funeral will be held on Thursday at 11:00am at Poplar Springs Baptist Church with Elder Sam Bowen officiating. Her body will lie-in-state one hour prior to the service. For those unable to attend, a livestream will be available at www.facebook.com/groups/jafhlive . Interment will follow in the church cemetery. Pallbearers will be Jay Bowen, Larry Fields, Dan Johnson, Lee Baird, Matthew Bowen, Mike Fields and Jay Cannady. Honorary Pallbearers will be the staff of Joiner-Anderson Funeral Home. The family request that memorial contributions be made to Poplar Springs Baptist Church Cemetery Fund, 4700 Poplar Springs Church Road, Portal, Ga. 30450. Friends may sign the online register book at www.joineranderson.com Joiner-Anderson Funeral Home & Crematory of Statesboro is in charge of arrangements.

The family of Mrs. Frances Bonnett Aaron created this Life Tributes page to make it easy to share your memories.

Send flowers to the Aaron family.