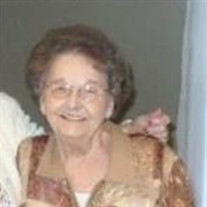 Frances Helen Price Oglesby, age 94, beloved mother, grandmother, and great-grandmother, left this earth on Wednesday February 24th 2021 to go for her long awaited walk with Jesus. She’s been looking forward to seeing him for a long time. She was born in Fulton County, GA to Leonard Richardson Cabe and Arrie Lee Cabe. She had seven brothers and sisters, all who preceded her in death. She was married to Ernest Preston Price until his death in 1974 and later married Woodrow Oglesby in College Park, GA. She was a “Rosie the Riveter” during WWII, assembling airplanes and later became a top-notch bookkeeper in her career. Her hobbies were singing hymns, knitting, and spending time with Jesus. She taught a Sunday school class for many years that she loved. In her later years, she spent a lot of her time reading her Bible and praying for her family. She told everyone she met about Jesus and wanted us all to know him like she did. She leaves behind three children, Richard Price (Carolyn), Renee Everett (Gary), and Darlene Newcity (Chuck), her precious grandchildren, Jared Veal, Jason Veal, Heidi Burke (Noel), Mika Veal, Heather Shaw (Will), Dr. Nicole Price Bentley (Doug), and Jonathan Price, her seven great-grandchildren, Christopher, Amber, Ryan, Riley, Will, Preston, and James. She is also survived by many nieces and nephews, including her niece Diana who was such a help to her for the time she was in Atlanta. Graveside services and burial will be held on Sunday at 2:00pm at Harmony Baptist Church Cemetery in Soperton, GA with Rev. Tom Green officiating. Friends may sign the online register book at www.joineranderson.com Joiner-Anderson Funeral Home & Crematory of Statesboro is in charge of arrangements.

The family of Mrs. Frances Helen Price Oglesby created this Life Tributes page to make it easy to share your memories.

Send flowers to the Oglesby family.