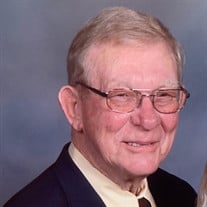 Statesboro, Georgia Mr. Franklin Donald Hagan, age 88, died November 6, 2021, at the Ogeechee Area Hospice Inpatient Facility in Statesboro. The native and lifelong resident of Bulloch County was the last surviving child born to Mike and Eliza Spence Hagan of Bulloch County. Franklin graduated from Statesboro High School in 1954, while in school he was mobilized in 1950 with the Army National Guard and returned in 1953 to complete his education. He attended Georgia Teachers College and later worked for J.P. Stevens Company for several years. He then began his career with T.J. Morris Company, retiring in 1994, following 37 years of dedicated service. Franklin continued to work part time for the Bulloch County Board of Education for several years. He loved playing cards, especially Hand and Foot with his family and friends, he enjoyed watching his grandchildren play ball and he spent many hours, fishing and rabbit and fox hunting with his beagles. Franklin was a member of the Statesboro Primitive Baptist Church for almost 50 years, where he was a member of the Frank Williams Bible Study and the Men’s Brotherhood. He was also a member of the Monday Night Supper Club. The family gives special thanks to his at home caregiver, Ellen Lanier, and all the nurses at Ogeechee Area Hospice. He was preceded in death by his parents and all of his siblings. Surviving are his wife of 66 years, Shelvie Allen Hagan of Statesboro; a daughter and son-in-law, Pam and Joey Bland of Statesboro; a son and daughter-in-law, Brian and Kay Hagan of Glennville; five grandchildren, Kaylyn, Brenley and Parks Hagan all of Glennville and Garrett (Skylar) Bland and Chandler Bland all of Statesboro; two great grandchildren, Bailey Hampton and Gracie Thigpen; his sisters-in-law and brother-in-law, Linwood and Jewell Bowman of Statesboro, Margie Denmark of Statesboro, and June Hagan of Vidalia. Several nieces and nephews also survive. The family will receive visitors on Monday from 10:00am until 11:00am at Joiner-Anderson Funeral Home in Statesboro. Funeral services will follow the visitation at 11:00am in the chapel of Joiner-Anderson Funeral Home in Statesboro with Dr. Charlie Cooper and Elder Randy Waters officiating. For those desiring to view the service via livestream my do so by joining the group “Joiner-Anderson Live Stream” at https:www.facebook.com/groups/jafhlive/. Interment will be in Bulloch Memorial Gardens. Pallbearers will be Brenley Hagan, Parks Hagan, Garrett Bland, Chandler Bland, Larry Bowman and Jimmy Akins. Honorary Pallbearers will be members of the Monday Night Supper Club. The family requests that memorial contributions be made to Ogeechee Area Hospice P.O. Box 531, Statesboro, Georgia 30459 or Statesboro Primitive Baptist Church, 4 South Zetterower Ave. Statesboro, Georgia 30458. Friends may sign the online register book at www.joineranderson.com. Joiner-Anderson Funeral Home & Crematory of Statesboro is in charge of the arrangements.

The family of Mr. Franklin Donald Hagan created this Life Tributes page to make it easy to share your memories.

Send flowers to the Hagan family.