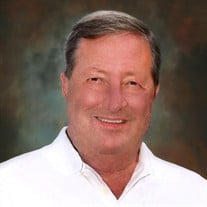 Mr. Gary Eugene Hulsey, age 66, passed away on Saturday evening, January 1st 2022 at his home in Statesboro following an extended illness. Gary was born on September 18th 1955 in Joliette, IL to the late M.C. Hulsey and Mrs. Louise Brown Hulsey. He was raised in Portal, GA and attended Portal High School. In school Gary was an athlete. He excelled in baseball and basketball, graduating in 1973. Gary worked for Emerson Electric for several years in customer service and later owned and operated the former Jacksons Grocery which became Gary’s Grocery, for over 12 years. Before his medical retirement, Gary was a Rural Carrier for the United States Postal Service for over 10 years. His gregarious and outgoing personality meant that Gary never met a stranger. He could stop for a tank of gas and end up with a lifelong friend by the time he left the store. His friendly, outgoing personality shined thru even during his illness. He would still make people smile with a funny anecdote or just by sharing his smile with them. He was known as a prankster and loved joking with everyone, not just his friends and family. Gary loved the Georgia Bulldogs and spending time with his grandkids who knew him as PopPop. He was preceded in death by his parents, his son, Wesley Hulsey, and his brother, Dennis Hulsey. Gary is survived by his wife of 46 years, LaRita Hulsey of Statesboro, his son, Jeremy Brent Hulsey, his grandchildren, Abby, Jackson, and Chase, his brother, Marion (Terri) Hulsey, his sisters, Brenda (Mel) Clark and Sandra Maddox, his sister-in-law, Becky Hulsey, the Phillips family; Carolyn Phillips, Natalie (Mike) Howard, Gina (Jeru) Minick, Matt (Katrina) Phillips, many nieces and nephews, as well as his dog Princess. The family will receive visitors on Tuesday from 4:00pm until 7:00pm at Joiner-Anderson Funeral Home in Statesboro. The funeral will be held on Wednesday at 11:00am in the funeral home chapel with Gary’s nephew, Pastor Hunter Howard, officiating. For those unable to attend, a livestream will be available at www.facebook.com/groups/jafhlive Interment will be at Eastside Cemetery. Pallbearers will be Gerald Golden, Rod Folds, Brian Hulsey, William Horne, Travis Motes, and Dusty Motes. Friends may sign the online register book at www.joineranderson.com Joiner-Anderson Funeral Home & Crematory of Statesboro is in charge of arrangements.

The family of Mr. Gary Eugene Hulsey created this Life Tributes page to make it easy to share your memories.

Send flowers to the Hulsey family.