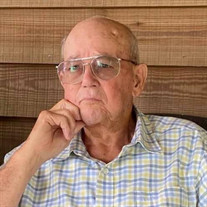 George William “Billy” Newton (aka “POP”), age 84, passed away on Sunday, February 14, 2021 at Ogeechee Area Hospice in Statesboro, GA. He was born in the old Charles Evans homeplace in Ogeechee – the home of his grandparents, Sterling and Willie Mae Jeffers Evans. Many generations of Billy’s Evans family were born and raised in that home. He was the first child born to John William “Kitchens” and Juanita Evans Newton. Billy was raised in Savannah with siblings Mary Newton Kamoroff and Larry Newton. Billy was earning a living early in life – as a paperboy for the Savannah Morning News. Though he was raised in the city --- his heart was always in the country, where he was born outside of Sylvania. Every summer and the last two years of High School – Billy lived with his grandparents – better known to this extended family as “Big Granny” and “Granddaddy.” He absolutely worshipped them – and his other family here in Sylvania. Billy was especially close to his Uncle Cecil Evans, whom he worked alongside at the old A&P Grocery in Sylvania. He graduated from Screven County High School in 1954. In 1956 at age 19, he married Shirley Stafford, 10th of 16 children born to Wm Jefferson and Lozzie Williams Stafford. They were married at McBride Methodist ---- with only their parents in attendance. During those early years together, the young couple lived in Savannah – where Billy worked at a cabinet shop – and then at a fertilizer plant located near where the modern-day Westin is located on the opposite side of River Street. Billy and Shirley had three children Ray, Tommy and Cindy. The young family moved to Beaufort, SC in 1968 where Billy managed the export terminal at Port Royal Clay Company where they exported kaolin mined from central Georgia. In Beaufort, Billy was actively involved in the Port Royal Masonic Lodge as well as the Shriners and Scottish Rite. In 1983 – Billy and Shirley decided to move closer to their Sylvania roots – settling for a while just outside of Springfield. Living close to home allowed them to reconnect to family like Shirley’s sisters Jeanette Stafford-Harley, Luree Stafford-Hodges and Carolyn Stafford-Adams. It also allowed Billy to be closer to his beloved Grandmother and his Aunt Grace Evans-Zeigler. After moving to Springfield, Billy’s new passion became training and flying homing pigeons. He joined a club based out of Effingham, and quickly became one of the most successful lofts in the southeast. Soon – a new chapter started – a new generation - 12 grandkids were born over the next several years - four born to Ray/Karen (Ryan, Kim, Ashley, Taylor) – four to Tommy/Kristi (TJ, Mandy, Sarah Grace and Sawyer) and four to Cindy/Stephen Parker (Heather, Brittany, Wesley and Jordan). In 1998, Billy retired after 30+ years at the Port, quickly sold their place in Springfield and headed home to the farm in Ogeechee where he was born. Always needing a focus in life, Billy’s new passion became playing on his tractors and raising cattle -- initially in partnership with Mama’s brother Spike Stafford. Tragically, in December 2002 – he lost Shirley. A couple years later, Billy was blessed to find a new love – Betty Jean McMillan-Cannon, widow of Charles Cannon. Billy and Betty Jean were married in 2006 here in Sylvania. They moved into to that old EVANS homeplace where he was born – full circle for Billy. Next chapter/generation: 16 great grands were born…. And Billy inherited a huge crew of Cannon/McMillen grands and great grands. Daddy and Betty Jean spent 15 long years together. They enjoyed time with family and with their very close friends including Lunette/Buddy Whitehead and Bobby/Mary Florence Cannon. Billy and Betty Jean were very active members at McBride Church, and they adored their extended church family. Billy’s life and heart were full, and he truly enjoyed his final years with family, raising cattle with son Tommy and building a strong personal relationship with God. Surrounded by those he loved the most, he endured so much the last few months….but he kept his faith….which sustained him until the end…and death became the ultimate healing that he needed. We love you Daddy – Pop – Billy – you were one of a kind and we will miss you so very much. However, we are thankful that we know where you are --- and that you are in pain no longer. We will see you “in a little while”. Billy was preceded in death by his wife Shirley Stafford Newton, parents, John William and Juanita Evans Newton and brother Larry Newton. Billy is survived by his loving wife, Betty Jean, his three children Ray (Lynda) Newton of Beaufort, Tommy (Kristi) Newton of Sylvania and Cindy (Stephen) Parker of Sylvania. He is also survived by a sister that he adored, Mary Newton Kamoroff of Columbia, SC – 12 grandchildren and 16 great grandchildren – as well as several step-children/grandchildren. Graveside services will be held at 3:30 – Screven County Memorial Cemetery on Wednesday, Feb 17 with Rev. Dr. Karen Zeigler and Rev. Travis Smith officiating. In lieu of flowers, Daddy had asked that any donations be given to the Ogeechee Area Hospice, P.O. Box 531, Statesboro, GA 30459, or to McBride United Methodist Church, 2400 Newington Highway, Sylvania, GA 30467. Pall Bearers will be his grandsons – Ryan Newton, TJ Newton, Sawyer Newton, Wesley Parker, Jordan Parker and grandsons-in-law, Michael McDaniel and Alston Rahn. Friends may sign the online register book at www.joineranderson.com Joiner Anderson Funeral Home Screven Chapel is in charge of all arrangements.

The family of Mr. George "Billy" William Newton created this Life Tributes page to make it easy to share your memories.