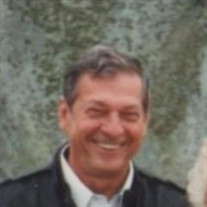 George William “Billy” Blackburn, Jr., 90, of Sylvania passed Wednesday evening October 7, 2020 at his residence surrounded by his loving family. Billy was born to the late George William, Sr. and Agnes Evans Blackburn on December 22, 1929 on the family homeplace. As a youth he worked side jobs to purchase flight lessons and at the age of 16 obtained his pilots license. He graduated class of 1948 from the Screven County High School and afterwards graduated from the Draughons Business School, now South College. He entered the National Guard and served during the Korean War and retired with 17 years of service as a Warrant Officer Second Class. Following his service he was employed with DuPont, now Savannah River Site. There he had an illustrious and 42 year long employment where he worked his way from an entry position and retired as Project Manager. While employed with DuPont he had the opportunity for further education and attended Princeton University for an engineering course. He was a member of the First Baptist Church of Sylvania and served as a Sunday school teacher and Deacon. He was a member of Woodmen of the World and served as an officer, the Sylvania Masonic Lodge #301 with 66 years of service, the Screven County Shrine Club having served as past Potentate, former Postmaster of the American Legion Post #116, former board member of the Screven County Hospital. His love for aviation would result in owning numerous planes and serving 68 years with the Screven County Airport Authority. In his free time he enjoyed cutting grass, fishing, playing guitar and writing songs. He especially enjoyed time spent with his grands and great-grands and was the loving patriarch of his immediate and extended family, and will be missed by all. He was preceded in death by his a son-in-law, Lester Paul Norton; sister and brother-in-law, Nellwyn Blackburn and Steve Robbins; and a brother and sister-in-law, Bowie Evans “Doc” and Nancy Blackburn. Survivors include wife of 71 years Bonnie Flatman Blackburn of Sylvania; children, Vicki Blackburn Allen of Beech Island, SC, Kim Blackburn Norton, William Ernest “Billy” and Marcie Thorne Blackburn, all of Sylvania, Suzanne Blackburn Oliver of Brooklet; grandchildren, Summer Johnson Black, Ryan Garrett and Katherine Norton, Kymberly Norton and Michael Snow, Cody Cameron Norton, Evan Blackburn Hilscher, Bonnie Sarah Blackburn, Haley Alexandra Oliver, and Alexander Hayes Oliver; great-grandchildren, Colton Black, Claire Black, Ava Norton, James Norton, Aaron Snow, Presley Snow, Olyvia Hilscher, and Amelia Hilscher; two brothers and sisters-in-law, Tom and Lennis Blackburn of Sun City, SC and Ronnie and Karen Blackburn of Sylvania, and a host of nieces and nephews. Visitation will be held Saturday from noon to 2:00pm in the Screven Chapel of Joiner Anderson Funeral Home. Graveside services will follow at 2:15pm in the Screven Memorial Cemetery with Rev. Dr. Charlie Cooper officiating with full military honors. Pallbearers will be Phil Oliver, Hayes Oliver, Ryan Norton, Cody Norton, George Robbins, Heyward Robbins, Colton Black, and Michael Snow. Honorary pallbearers will be members of the American Legion Post #116 and the Sylvania Masonic Lodge #301. Memorial contributions may be made to the First Baptist Church building and grounds fund, P.O. Box 318 Sylvania, GA 30467. Friends may sign the online register book at www.joineranderson.com Joiner Anderson Funeral Home Screven Chapel is in charge of all arrangements.

The family of Mr. George W. "Billy" Blackburn Jr. created this Life Tributes page to make it easy to share your memories.

Send flowers to the Blackburn family.