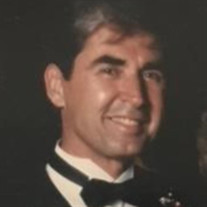 Gerald Edwin Manack Woodsman Jerry Manack of Sylvania, Georgia passed away February 11, 2021. He was 89 years old. He was surrounded by his family. Jerry was born in Sylvania, Georgia and lived there throughout his life. He was married to Kay Daughtry Manack, who preceded him in death in 2001. He owned and operated a timber business throughout his career and retired on his tree farm in Screven County. Jerry was proud of his Italian heritage (his father’s original surname was “Magnacca”), as was reflected in his high-spiritedness and passion for life. His love of the outdoors and the beauty of nature were prevalent throughout his life, and he was a skilled hunter. He especially enjoyed hunting with his children, and with his best friend Dr. Robert B. Pamplin, Jr. He and Dr. Pamplin hunted all over the world, including an African safari in the 1960’s. Regarding their friendship, Dr. Pamplin shared these words: “As Jerry’s best friend, I am proud, honored, and thankful to have shared many grand adventures from hunting to cruising timber and logging. From his wealth of practical expertise, he taught me how to endure hardships and be successful. Over the years I learned that if you followed Jerry’s advice and counsel your efforts would work to a beneficial end. But aside from being a mentor, I knew I was associated with an honorable gentleman. Being a gentleman like Jerry causes these words to come to mind. Even from childhood, I knew to respect and revere anyone whose life described characteristics of the “old school.” Such a person exhibited integrity, worked hard, loved his family and country, had a strong faith, and venerated the reputation of a gentleman. Jerry Manack was a man from the “old school”, illustrating a pronounced significance in his conduct and clear proof that one human life can make a difference. While we await the day when we will be united with Jerry in God’s heavenly kingdom, the miracle of Jerry’s life will remain with all of us.” In addition to his beloved wife Kay, he is preceded in death by his father Massmian J. Manack, his mother Elizabeth Morrison Manack Pippins, and one sister, Celeste Manack Waters. Jerry is survived by his three children – a daughter, Mona Lisa Manack Renick (Clay); and two sons, Max Gerald Manack (Susan), and Todd Pamplin Manack (Ashley); three grandchildren – Sam Renick (Rachel), John Manack (Miranda), and Madeline Manack Ward (Dylan); step grandson Connor Calhoun, and two great-grandsons – Alexander and Oliver Renick; as well as several nieces and nephews. There will be a private family memorial service to celebrate the life of Jerry Manack. The family wishes to express their heartfelt gratitude to the caregivers and hospice nurses who assisted Jerry and enabled him to remain at his home on Beaverdam Creek, the spot he and Kay so dearly loved. In lieu of flowers the family requests that memorials be made to His Grace Church of Sylvania or Ogeechee Area Hospice of Statesboro, Georgia. Friends may sign the online register book at www.joineranderson.com Joiner Anderson Funeral Home Screven Chapel is in charge of all arrangements.

Gerald Edwin Manack Woodsman Jerry Manack of Sylvania, Georgia passed away February 11, 2021. He was 89 years old. He was surrounded by his family. Jerry was born in Sylvania, Georgia and lived there throughout his life. He was married... View Obituary & Service Information

The family of Mr. Gerald Edwin Manack created this Life Tributes page to make it easy to share your memories.

Send flowers to the Manack family.