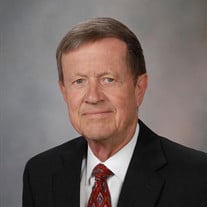 Gerald (Jere) Floyd Fletcher, age 86, passed away peacefully at home in Jacksonville Beach, Florida on January 23, 2022 after a brief illness. He was born in Statesboro, Georgia on January 31, 1935 to Fred Franklin Fletcher and Niecie Floyd Fletcher. He graduated from Statesboro High School in 1953 and Emory College of Arts and Sciences in 1957. While an undergraduate at Emory, he was President of the Sigma Chi Fraternity making life-long friends. He was a member of Omicron Delta Kappa and the Senior Honor Society. Graduating from Emory University School of Medicine in 1961 he went on to become board certified in internal medicine and cardiology. Jere had a passion for traveling, music and appreciated all things about World War II and its history. The perfect evening was at the best piano bar in any of the many cities he traveled, enjoying wine with Barbara, his best friend and love of his life, while they listened, sang along, and chatted with the pianists from Washington, DC to San Francisco. These pianists became lifelong friends, always welcoming repeat visits. Jere was a globally known physician, researcher and educator providing care to thousands of patients, contributing to cardiac rehabilitation medicine and educating healthcare professionals globally. Following residency, he was the Marine Corp's Ward Medical Officer in San Diego and University of California School of Medicine faculty. Returning to Atlanta, he was Director of Internal Medicine at Georgia Baptist Medical Center and faculty at Emory's School of Medicine. He served as Professor and Chairman of the Department of Rehabilitation until moving to Florida's Mayo Clinic and their College of Medicine as a Professor of Medicine. Dr. Fletcher conducted research on cardiac rehabilitation medicine. He received millions of dollars in funds from the NIH, pharmaceutical industry and foundations. Jere was a prolific writer with over 200 peer-reviewed scientific publications addressing all aspects of cardiac rehabilitation and prevention. He was invited by domestic and international professional societies to contribute to clinical guidelines, scientific statements and other documents. Jere was an editorial board member or peer reviewer for a dozen scientific journals. He was widely invited to give lectures globally. Jere was a Fellow in the American College of Cardiology (ACC), American College of Physicians, National Lipid Association (N LA) and Clinical Cardiology Council of the American Heart Association (AHA). He supported AHA at local levels in leadership roles in Georgia and Florida. At national AHA, Jere provided 50 years of service on over 50 science committees including Council of Clinical Cardiology Chairman, National Science Committee and National Board member. Jere was a life-long member of the American Medical Association, ACC, NLA and other groups. Jere is survived by his wife, Barbara Johnston Fletcher, two children David Ladd Fletcher (Kelly) from Atlanta, Ruby Christina Fletcher from Lancaster, PA; and grandchildren Hutch, Henry and Hudson Fletcher from Atlanta. A graveside service and burial will be held Saturday, January 29,2022 at 11:00am at Eastside Cemetery in Statesboro, GA. Memorial contributions can be made to: Emory University School of Medicine or Mayo Clinic Jacksonville, Department of Cardiology, or the charity of choice. Friends may sign the online register book at www.joineranderson.com. Joiner - Anderson Funeral Home & Crematory of Statesboro is in charge of the arrangements.

Gerald (Jere) Floyd Fletcher, age 86, passed away peacefully at home in Jacksonville Beach, Florida on January 23, 2022 after a brief illness. He was born in Statesboro, Georgia on January 31, 1935 to Fred Franklin Fletcher and Niecie Floyd... View Obituary & Service Information

The family of Dr. Gerald (Jere) Floyd Fletcher created this Life Tributes page to make it easy to share your memories.

Send flowers to the Fletcher family.