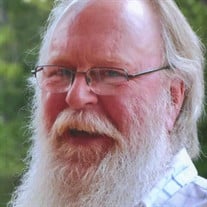 Glenn Edward Parker died on Sunday, June 13, 2021 at the age of 71 at his home. Glenn Edward Parker was born in Millen, Georgia on November 18, 1949 to Francis Edward Parker and Lorene Bland Parker. He attended school at Rocky Ford Elementary and Screven County High School graduating in 1967. He attended trade school in Americus studying Communications. After trade school he began working for BellSouth/AT&T in Millen as an outside plant technician and retired after 30 years. On June 13, 1981 he married Sherree Thompson Parker. Glenn was a volunteer fire fighter in Rocky Ford for 15 years. He loved to fish and cook on the smoker/grill and to have a vegetable garden each year. Glenn served in the military 1970-1973. Glenn was a member of Oak Grove United Methodist Church. Each year he was known as the “Grits Man” at the Annual Fish Fry at the church. Glenn and Sherree enjoyed working with the youth of the Church by preparing food for the group attending Methodist Youth Fellowship (MYF) on Wednesday nights. He served on many committees and was a member of the Church Council. He was a member of the United Methodist Men. He was predeceased by his father Francis Edward Parker, mother Lorene Bland Parker, brother James Francis Parker and father-in-law Roger E. Thompson. Glenn is survived by his loving wife Sherree Thompson Parker of 40 years and son Steven Evans Parker. Sisters Barbara Brush (Ralph), Linda LaMontagne (Paul), Becky Scott (Hikey), Sue Robbins and Vicky Hudgins (Bob), sister-in-law Faye Parker (Jimmy), mother-in-law Margene Thompson (Roger), sister-in-law Joy Michelis (Micky), and brothers-in-law Dale Thompson (Janel) and Jerry Thompson (Brenda). He leaves behind many nieces and nephews to which he was lovingly called Uncle Buddy along with other family and lifelong friends. He loved his family very much and was proud of them all. He held many dear friends close to his heart. He will be deeply missed by his friends, family and all who knew him especially his highly anticipated birthday oyster roast. Glenn’s life was filled with love and laughter. The funeral will be held at Oak Grove United Methodist Church Saturday, June 19, 2021. Visitation will be at 1:00 p.m. in the sanctuary with a service at 2:00 p.m. also in the sanctuary, Pastors Steve Sirmons, Karen Zeigler and Hubert Reeves will officiate. Honorary Pallbearers are Troy Ward, Mike Hurst, Jessie Watkins, Levy Lowery, Garry Smith, Jim Bethel and Brian Lowery. In lieu of flowers donations can be sent to Hospice of your choice. Friends may sign the online register book at www.joineranderson.com Joiner Anderson Funeral Home Screven Chapel is in charge of all arrangements.

The family of Mr. Glenn Edward Parker created this Life Tributes page to make it easy to share your memories.

Send flowers to the Parker family.