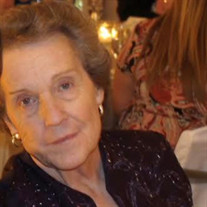 Leefield, Georgia/ Glennville, Georgia Mrs. Gloria Knight Taylor, age 88, died Thursday February 18, 2021 at her residence following a brief illness. The Bulloch County native was a 1948 graduate of Brooklet High School. Following her graduation, she married D.C. Taylor and she worked on their family farm. Gloria began her career as a school bus driver with the Bulloch County Board of Education in 1963, where she worked for many years until retiring. She was a member of Lanes Primitive Baptist Church where she had served as the church pianist. She also played piano for the Primitive Quartet for many years. Gloria greatest love was her family and spending time with them. She was preceded in death by her husband, D.C. Taylor; her parents, Lannie and Lottie McElveen Knight; her siblings, Clyde Knight, Esther Lee, Calhoun Knight, Raymond Knight and Charles Knight. Surviving are two daughters and a son-in-law, Sharon Brunger of Brooklet and Valerie and Brian Durrence of Glennville ;a son, Randy Taylor of Brooklet; six grandchildren and their spouses, David and Kerri Taylor of Savannah, Lynnie Brook Taylor of Valdosta, Kristi and Scott Manville of Glennville, Evan and Brittany Durrence of Hoschton, Taylor and Kyle Andre of Glennville and Amanda and Brad Holsinger of Fayetteville, NC; 14 great grandchildren a brother and sister-in-law, Willie and Gale Knight of Brooklet; her loving dog Carly and several nieces and nephews. Graveside services and burial will be Sunday at 2:00pm at Lanes Primitive Baptist Church Cemetery with Elder Dean Robbins officiating, assisted by Elder Lee Chambers. The family will receive visitors at the cemetery following the service. Pallbearers will be David Taylor, Evan Durrence, Ronnie Knight, Winton Knight, Brad Holsinger, and Brandon Manville. The family requests that memorial contributions be made to Lanes Primitive Baptist Church, 1022 Lanes Church Road, Brooklet, Ga. 30415. Friends may sign the online register book at www.joineranderson.com. Joiner-Anderson funeral Home & Crematory of Statesboro is in charge of the arrangements.

The family of Mrs. Gloria Knight Taylor created this Life Tributes page to make it easy to share your memories.

Send flowers to the Taylor family.