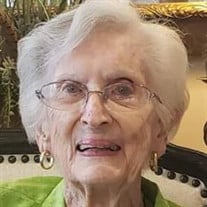 Gwendolyn W. Olliff Statesboro, Georgia Mrs. Gwendolyn Williams Olliff, age 89, died on Sunday August 1, 2021, at her residence under the care of Ogeechee Area Hospice. She was born in Calhoun, Gordon County Georgia, but lived in Statesboro since 1955. Mrs. Gwen graduated from Calhoun High School and earned a B.S. degree in Home Economics and later a degree in Education from Georgia Teacher’s College in 1953. She was employed with the Bulloch County Board of Education enjoying 29½ years of teaching until she retired in 1994. Mrs. Gwen was a member of Statesboro First Baptist Church and the Alathean Sunday School class, serving in many areas. She was a member of Beta Sigma Phi since 1956 and a member of the local chapter of Educational Society Delta Kappa Gamma. She was preceded in death by her parents Lillian L. and Henry Williams and her sister Charlotte Cochran Survivors include her husband of 66 years, Mr. Foy Olliff, a daughter and son-in-law, Lynn and Stewart Young of Thomson, GA, two sons and daughters-in-law, Bill and Becky Olliff, Bob and Tammy Olliff, all of Statesboro; four grandchildren, Wesley (Jessica) of Savannah and Jennifer (Jon) Waters, Morgan Olliff and Erin Olliff, all of Statesboro and four great grandchildren, Emilee and Will Waters of Statesboro and Archer and Jennings Olliff of Savannah. Also surviving a step grandson, Brandon (Filene) Young, and step great grandchildren Esther Grace, Elisha and Ezekiel Young, and several nieces and nephews. The family would like to express their gratitude to her caregivers; Tina Mercer Mobley, Peaches Roberson, Brenda Rich, Gracie Williams, Pearl Johnson and Gwen Lanier. Visitation will be held on Thursday from 10:00 a.m. until 11:00 a.m. at Joiner Anderson Funeral Home with the service following at 11:00 in the chapel with Dr. H. William Perry and Rev. Ricky Allen officiating. Memorials can be made to Nursing Fund at First Baptist Church 108 N. Main Street Statesboro, GA 30458 or to Ogeechee Area Hospice at P.O. Box 531 Statesboro, GA 30459. Interment will follow at Eastside Cemetery. Pallbearers will be Tommy Jordan, Jon Owens, Roy Roundtree, Joe Mathews, Greg Hodges, Donald Long, Lovett Bennett and Ricky Hutchinson. Friends may sign the online register book at www.joineranderson.com Joiner-Anderson Funeral Home and Crematory of Statesboro is in charge of arrangements.

The family of Mrs. Gwendolyn Williams Olliff created this Life Tributes page to make it easy to share your memories.

Send flowers to the Olliff family.