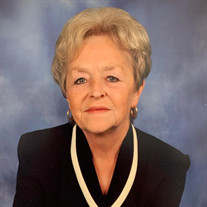 Mrs. Gwynell Colson Moon, age 75, passed away Friday, May 14th 2021 at her home in Statesboro. A native of Bulloch County, Mrs. Gwen was born on January 5th 1946 in Register, GA to the late Mr. Walter Colson and Mrs. Maggie Weathers Colson. She attended school in Claxton, GA and soon after high school married Wilmer Marlin “W.M.” Moon. Mrs. Gwen worked as a waitress at the Nic Nac Grill in Statesboro and later at Vandy’s BBQ where she retired after 37 years. When she wasn’t working, she enjoyed her time at home working in the yard and planting flowers. Mrs. Gwen was preceded in death by her parents, her husband, W.M. Moon, a sister, Freeda Driggers, and two brothers, Harry Colson and Jimmy Colson. She is survived by her son and daughter-in-law, Randall and Angela Moon of Statesboro, her two grandchildren, Justin Moon (Angela) and Joshua Moon, two great-grandchildren, Mason and Harley, and her brother, Benny Colson. The family will receive visitors on Monday from 5:00pm until 7:00pm at Joiner-Anderson Funeral Home in Statesboro. The funeral will be held on Tuesday at 11:00am in the funeral home chapel with Pastor Tim Huffingham officiating. Interment will be at Evergreen Baptist Church in Candler County. Pallbearers will be Justin Moon, Mason Moon, Randy Driggers, Paul Driggers, Stevie Colson, Wayne Colson, and Wes Oglesby. Friends may sign the online register book at www.joineranderson.com Joiner-Anderson Funeral Home & Crematory of Statesboro is in charge of arrangements.

The family of Mrs. Gwynell "Gwen" Colson Moon created this Life Tributes page to make it easy to share your memories.

Send flowers to the Moon family.