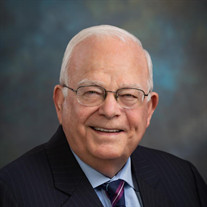 Statesboro, Georgia H. Lehman Franklin, Jr. passed away December 31 at the age of 80. He was preceded in death by his parents, Herbert Lehman Franklin, Sr. and Margaret McArthur Franklin, and his brother, James William (Billy) Franklin. He was a 1958 graduate of Statesboro High School. He graduated from the University of Georgia in 1962 (BBA) and from the University of Georgia School of Law in 1964 (JD). He was a member of Phi Kappa Phi Honor Society. He served in the U.S. Army and attained the rank of 1st Lieutenant, Artillery. Mr. Franklin began practicing law with Cohen Anderson, and formed his own law firm in 1968. He has practiced in Statesboro since that time. He was a member of the State Bar of Georgia, American Bar Association, and American Association for Justice. He was admitted to the Supreme Court of Georgia, Georgia Court of Appeals, the U. S. District Court, Southern District of Georgia; the 11th Circuit Court of Appeals, and the U.S. Supreme Court. He attained an AV (Preeminent) rating by Martindale-Hubbell. Mr. Franklin was past member of the Board of Directors of the Herty Foundation and served as Chairman for many years. Mr. Franklin became actively engaged in business at an early age and became involved in the development of apartments, offices, subdivisions, motels and restaurants primarily in the Southeastern part of the United States. He was involved in many local business ventures, including Statesboro CATV, Bel Air Estates, and Iron Gate Subdivision. He also owned and/or operated several motels and restaurants in the Southeast for many years, having served as a member of the Board of Directors of the Restaurant Council of the Howard Johnson Company. In addition to his business interests, he also took an interest in local, state and national politics, having served as a delegate to the Democratic National Convention in 1976 and 1980. In 2014, he was inducted into the Statesboro High School Athletic Hall of Fame, having played football for four years, serving as co-captain during his senior year. He was named as an outstanding running back (All State) in 1957. He played on the Statesboro High championship football teams in 1956 and 1957. He was captain of the Statesboro High School track team in his senior year. He went on to play football at the University of Georgia as a running back for the Georgia Bulldogs. Lehman was a member of First Baptist Church of Statesboro. He is survived by his daughters, Julie Anne Franklin of Atlanta, Laura Tiffany Franklin Cooke (David) of Statesboro, his son, H. Lehman Franklin, III (Lorie) of Statesboro; his grandchildren, Emmaline Keaton Harmon, Mary Ava (Honey) Harmon, Avis Grace Cooke, and Lily Keaton Cooke. He is also survived by his brother, Robert (Karen) Thomas Franklin of Statesboro, his sisters Gwen Franklin Freeman (David) of Augusta, and Peggy Franklin Colpoys (Michael) of Newnan. He is also survived by many nieces and nephews. The family will receive visitors on Monday January 4th from 5:00pm until 7:00pm in the chapel of Joiner-Anderson Funeral Home in Statesboro. Graveside services and burial will be held at Eastside Cemetery on Tuesday at 2:30pm with Dr. H. William Perry officiating. Masks and social distancing will be required for the safety of all. For those desiring to view the service via livestream, you may do so by joining the Facebook group “Joiner-Anderson Live Stream” at https://www.facebook.com/groups/jafhlive/ Pallbearers will be Doug Lambert, Kenny Stone, Lee Johnson, Ray McKinney, David Bobo and Dan Snipes. Honorary Pallbearers will be Franklin Dismuke, Employees and staff of H. Lehman Franklin Attorney At Law and members of the Bulloch County Bar Association. Friends may sign the online register book at www.joineranderson.com. Joiner-Anderson Funeral Home & Crematory of Statesboro is in charge of the arrangements.

Statesboro, Georgia H. Lehman Franklin, Jr. passed away December 31 at the age of 80. He was preceded in death by his parents, Herbert Lehman Franklin, Sr. and Margaret McArthur Franklin, and his brother, James William (Billy) Franklin.... View Obituary & Service Information

Send flowers to the Franklin family.