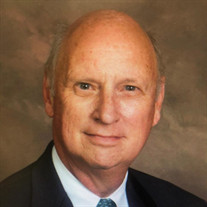 Dr. H. William “Bill” Perry Jr., a beloved pastor and long-time resident of Statesboro, entered into eternal rest on October 21, 2021 at the age of 80. Bill is survived by his wife, Margaret, of Statesboro, Georgia; his two daughters, Laura (Darrell) Myers of Grafton, Ohio; Gayla (John) Bennett of Gainesville, Georgia, and his three sisters, Janet Stainer of Tallahassee, Florida, Karen Capps of Raleigh, NC, and Sue (Don) Hunter of Live Oak, Florida. Bill was the proud grandfather of six grandchildren and two grand daughters-in-law: JD, Jamie, and Julianne Myers; and Drew (Olivia), Grant (Catelyn), and Jacob Whaley. He was an uncle to many nieces and nephews. He is preceded in death by his father Harvey, his mother Kathryn, his son Jon Bill, and his son-in-law Ken Whaley. Bill was born on February 7, 1941 in Live Oak, Florida. He graduated from Stetson University with a degree in Religion and received his Doctorate in Ministry from Southern Seminary in 1976. He married the love of his life Margaret on June 26, 1964, and they later welcomed their three beautiful children into the world. Bill was an active member of the Statesboro community. Known by many for his charming sense of humor, he frequently shared jokes with close friends and would often post them to Facebook. Bill was an active member of the Rotary Club of Statesboro for many years, winning the Citizen of the Year Award in 2005. He also served on the Board of Directors for the Ogeechee Area Hospice. Bill was a faithful servant of Jesus Christ and a devoted pastor. Over his 54 years of ministry, he pastored Powells Chapel Baptist Church; First Baptist Pelham, GA; First Baptist Hawkinsville, GA; First Baptist Statesboro, as well as serving as Interim Pastor at a number of churches following his retirement in 2004. He was currently serving at First Baptist Twin City. The family is thankful for the loving support of the community at this time. The family will receive visitors on Sunday, October 24, 2021, from 4:00pm until 6:00pm in the chapel of Joiner-Anderson Funeral Home in Statesboro. Funeral services will be Monday October 25, 2021, at 11:00am at First Baptist Church Statesboro with Rev. Drew Whaley, Rev. Darrell Myers and Dr. John Waters officiating. Dr. Perry will lie-in-state in the church sanctuary one hour prior to the service. For those unable to attend, a livestream will be available at www.facebook.com/groups/jafhlive Interment will be in Eastside Cemetery in Statesboro. Pallbearers will be his grandsons and sons-in-law. The family requests that memorial contributions be made to the Statesboro First Baptist Church Nursing Ministry, 108 North Main Street, Statesboro, Ga. 30458. Friends may sign the online register book at www.joineranderson.com. Joiner-Anderson Funeral Home & Crematory of Statesboro is in charge of the arrangements.

Dr. H. William &#8220;Bill&#8221; Perry Jr., a beloved pastor and long-time resident of Statesboro, entered into eternal rest on October 21, 2021 at the age of 80. Bill is survived by his wife, Margaret, of Statesboro, Georgia; his two daughters,... View Obituary & Service Information

The family of Dr. H. William Perry Jr. created this Life Tributes page to make it easy to share your memories.

Send flowers to the Perry family.