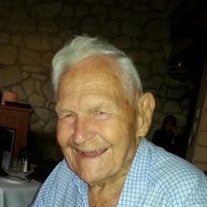 Statesboro, Georgia Mr. Harvey James Faglier passed away June 10, 2021 at Southern Manor Assisted Living under the care of Hospice with Regency Southern Care. He was born in Avera, Georgia in Jefferson County on October 14, 1925, the son of George Cecil Faglier and Theola Pittman Faglier. He started cutting wood as a boy with his father and brothers in Wrens, Ga. He met his wife, Maggie, in the shipyards of Savannah, GA during the war. He owned and operated several businesses in his lifetime to include a service station and motel in his hometown of Wrens, GA; a convenience-store and night club (The Red Candle) on highway 80 Statesboro. His wife suffered a severe stroke and he cared for her for seven years and had moved to Hixson, TN where his daughter could be of help. When his wife passed in 2000 he returned to Bulloch County and to Braswell Food Company, where he had worked as a young man, and it was there that he concluded his public work at age 87. Preceded in death by his beloved wife Maggie Finch Faglier, after 57 years of marriage, his only son Harvey Larry Faglier in 2014, his special friend Ruby Mock of 10 years in 2017; also his father and mother; five brothers Arthur Williams, G.C. Faglier, Ted Faglier, Joe Faglier and Eugene Faglier; three sisters Bernice Perdue, Agnes Carpenter and Barbara Woodward. He is survived by his daughter Martha Faglier Fama and her husband James Joseph Fama of Hixson, TN; grandsons Flint Faglier Clark of Millen, GA and Christopher Faglier of Las Vegas, NV and great grandson Hunter Clark. Visitation will be Monday, June 14, 2021 from 10:00 am till 11:00 am at Joiner-Anderson Funeral Home followed by a service at 11:00 am in the chapel with Pastor Thomas Hendrix officiating. Interment will be at Bulloch Memorial Gardens. Pallbearers will be Flint Faglier Clark, Hunter Clark, Javay Darrell Finch, Jim Fama, David Heape and Doy Lastingter. Friends may sign the online register book at www.joineranderson.com Joiner-Anderson Funeral Home & Crematory of Statesboro is in charge of arrangements.

Statesboro, Georgia Mr. Harvey James Faglier passed away June 10, 2021 at Southern Manor Assisted Living under the care of Hospice with Regency Southern Care. He was born in Avera, Georgia in Jefferson County on October 14, 1925, the son of... View Obituary & Service Information

The family of Mr. Harvey James Faglier created this Life Tributes page to make it easy to share your memories.

Send flowers to the Faglier family.