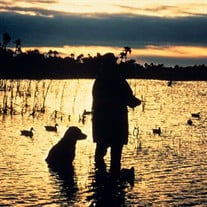 Register, Georgia Mr. Henry Earl Roberts, age 82, died peacefully at his home on Tuesday morning, October 26, 2021, under the care of Bethany Hospice, with his loving family by his side. A lifelong resident of Bulloch County, he was the son of the late Ellis and Rebie Roberts. Earl was employed for many years with the City of Statesboro, prior to his retirement. He was preceded in death by his late wife Maxie Ann Parrish; brothers, Charles, James, Pete and Smokie Roberts and a sister and brother-in-law, Ethel and Tom Collins. Earl was a loving husband, father and grandfather. He enjoyed raising his animals, fishing, hunting and working in his beautiful garden. The family is very thankful for Richard Sheffield helping to care for Earl during his last months. Earl is survived by his wife, Patricia Roberts; his sisters, Bernice Barrow and Louise Bongard, his son and daughter-in-law, Bobby and Janet Roberts of Rocky Ford; grandson Keith Roberts (Crystal); granddaughter, Jamie Lowery (Brian); sisters-in-law, Donna Roberts and Grace Parrish; several step children, grandchildren, great grandchildren, nieces and nephews. The family will receive visitors on Friday from 9:30am until 10:30am at Joiner-Anderson Funeral Home in Statesboro. Graveside services and burial will be held Friday at 11:00am at Middleground Primitive Baptist Church Cemetery with Pastor Donnie Roberts officiating. Pallbearers will be Keith Roberts, Brandon Roberts, Buck Sheffield, Chris Parrish, Shawn Roberts and Jose Alba Honorary Pallbearers will be Richard Sheffield and Eddie Collins. The family requests that memorial contributions be made to Bethany Hospice 109 South Duval Street, Claxton, Georgia 30417. Friends may sign the online register book at www.joineranderson.com. Joiner-Anderson Funeral Home & Crematory of Statesboro is in charge of the arrangements.

Register, Georgia Mr. Henry Earl Roberts, age 82, died peacefully at his home on Tuesday morning, October 26, 2021, under the care of Bethany Hospice, with his loving family by his side. A lifelong resident of Bulloch County, he was the son... View Obituary & Service Information

The family of Mr. Henry Earl Roberts created this Life Tributes page to make it easy to share your memories.

Send flowers to the Roberts family.