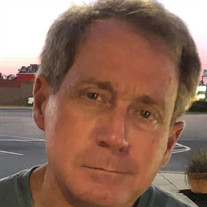 Statesboro, Georgia Mr. Hugh Robert Hotchkiss, age 59, died Friday September 25, 2020, at his residence. The Bulloch County native was a 1979 graduate of Statesboro High School. Following high school Hugh worked with Cooper-Wiss for many years until the facility in Statesboro closed, and later worked with JCB for six months. Hugh graduated from Ogeechee Technical Institute in 1995 with an associate degree and soon began a career with Viracon in Statesboro as a master electrician and was employed until his death. Throughout his life, Hugh has been a pecan farmer and enjoyed all of the time spent caring for his trees. He was a member of the Georgia Pecan Growers Association. Hugh loved to travel and he loved the beach. He and his wife made many memories traveling the world on cruises. His greatest joy was his granddaughters and he lived his life for the two of them. He was a member of Statesboro First Baptist Church. Hugh was preceded in death by his father-in-law, Kyle J. Cason and his grandparents, Rupert and Dorothy Deal and Lonnie and Annie Bell Alderman Hotchkiss. Surviving are his wife of 25 years, Sheila Cason Hotchkiss of Statesboro; a daughter and son-in-law, Casey Colbert Morris and Bosie of Claxton; two granddaughters, Kylie Collins and Jada Collins; his parents, Hugh Garis Hotchkiss and Dorothy Carolyn Deal Hotchkiss of Statesboro; a sister and brother-in-law, Susan and Marty Anderson of Statesboro; a brother and sister-in-law, Charles Randy and Lara Hotchkiss of Macon and his brothers-in-law and sisters-in-law, Lewis and Thelma Cason of Brooklet and David and Missy Cason of Statesboro. Several nieces, nephews, aunts and cousins also survive. The family will receive visitors on Sunday from 2:00pm until 4:00pm at Joiner-Anderson Funeral Home in Statesboro. Funeral services will be Sunday at 4:00pm in the chapel of Joiner-Anderson Funeral Home with Dr. John Waters officiating. Interment will be in the Alderman Family Cemetery. Pallbearers will be Brian Rogers, Lemuel Deal, Eddie Saxon, Walter Deal, Richard Deal and Steve Hotchkiss. Honorary pallbearers will be the Maintenance Crew at Viracon and Cooper Wiss, also Jimmy Sturdivant and Ricky Kicklighter. The family requests that memorial contributions be made to Statesboro First Baptist Church, 108 North Main Street, Statesboro, Georgia 30458 or the Alzheimer’s Association, 4849 Paulsen Street, Suite 103 , Savannah, Georgia 31406. Services are streamed using Facebook Live through a private group. Only members of the group will be able to view the service. In order to view the service, log into Facebook on your phone or computer and join the group “Joiner-Anderson Live Stream at: https://www.facebook.com/groups/jafhlive/ If you have any questions, please contact the funeral home @ 912-764-7725. Friends may sign the online register book at www.joineranderson.com. Joiner-Anderson Funeral Home & Crematory of Statesboro is in charge of the arrangements.

The family of Mr. Hugh Robert Hotchkiss created this Life Tributes page to make it easy to share your memories.

Send flowers to the Hotchkiss family.