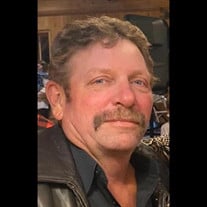 Statesboro, Georgia Jack ‘Jimbo’ Waters Jr., born July 6, 1962, left for his Heavenly Home on June 9, 2021 after a very courageous battle with cancer. He fought so hard to stay for his family, but he is now free from this body. His family is celebrating his Heavenly homecoming, but his departure leaves a huge hole for so many. He was preceded in death by his father, Jack Waters Sr and his step-father, JD Clark. He is survived by his wife of 35 years, Michele, his children Andrew (Melissa), Amber, Kristy Tyler (Bobby) and Seth (Heather), his Mother, Sandra Clark (Jimmy), his In-laws, Gary Lewers (Judy), sister In-l, Jena McGrath (Michael), brother, West (Jamie), grandchildren, Jackson, Ian, Madilyn and Maddox and several aunts, uncles, cousins, nieces and nephews. Jack graduated from Statesboro High School in 1980. While in high school, he worked at ITT Grinnell. After graduation, he worked at Plant Vogel as a crane operator. He loved being outdoors and transitioned into a life-long career in Home Building for over 30 years. He loved envisioning beautiful houses or home additions and seeing them built to his idea which gave him great pride. Jack loved his family fiercely! He enjoyed being a part of several bands in his life playing guitar and had a passion for music. He loved UGA Football, NASCAR racing, hunting, fishing, boating, flying RC airplanes and watching his son and grandchildren race go-karts. He would help anyone. He brought home many wounded animals because he had such a huge heart. Honorary Pallbearers are Bobby Lane, Charlie Crowley, Dennis Lee, Mike Sloan, Worth Presley, Hal Miller, Thomas Lariscy, Tommy Brown and Bruce Jones. Visitation will be Saturday, June 12, 2021 from 5pm-8pm at Joiner Anderson Funeral Home. The funeral service will be held on Sunday, June 13, 2021 at 2pm in the chapel of Joiner Anderson with Reverend Will Griffith officiating. Friends may sign the online register book at www.joineranderson.com. Joiner-Anderson Funeral Home & Crematory in Statesboro is in charge of arrangements.

The family of Mr. Jacky Clinton "Jimbo" Waters Jr created this Life Tributes page to make it easy to share your memories.

Send flowers to the Waters family.